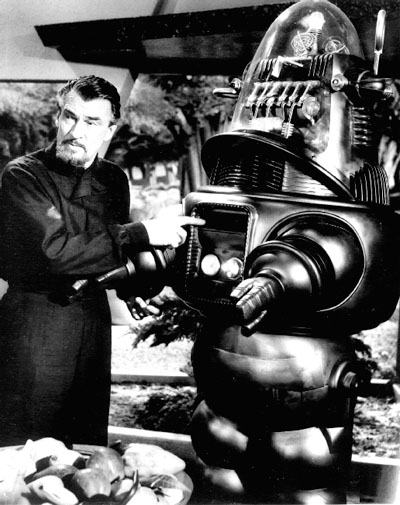 Robby the Robot and Dr. Morpheus in The Forbidden Planet.

Robby was a popular, glass-domed robot that appeared in a number of films and TV series from the 1950s through the 1980s. Robby the Robot made his debut in the classic science fiction movie Forbidden Planet (1956) as a bulbous mechanical man built by Earth scientist Dr. Morbius (Walter Pidgeon) using knowledge left by the Krel, a long-dead alien race. Fueled by "isotope 217" (see notes below), Robby is multilingual ("If you do not speak English, I am at your disposal with 187 other languages along with their various dialects and subtongues."), and capable of lifting great weights, synthesizing anything from gems to bourbon, and carrying out any domestic chore.

In reality, Robby was the creation of Japanese designer/engineer Robert Kinoshita who also served as art director for the TV series Lost in Space. The robot was an elaborate metal shell, weighing 100 lb and costing the then-astronomical sum of $125,000. Robby's various spinning and clicking gadgets were supplied by 2,600 ft of electrical wiring. His arms and legs were moved by a human operator inside. Actor Marvin Miller supplied Robby's deep voice.

As well as Forbidden Planet, Robby featured in the film The Invisible Boy (1957), a 1964 episode of The Twilight Zone ("The Brain Center At Whipples") and an episode of The Addams Family ("Lurch's Little Helper"). The Lost in Space episodes "War of the Robots" (#1.20) and "The Condemned Of Space" (#3.1) saw Robby team up with Lost in Space's robot regular, B-9. Robby also appeared in Gilligan's Island as a government test robot that accidentally parachuted onto the island, in the "Mind Over Mayhem" episode of Columbo, and in Mork & Mindy as an aging museum exhibit scheduled for the scrap heap which Mork accidentally bestows with human emotions.

Many of the features of B-9, the robot used in Lost in Space, parallel those of Robby. These include a glass head with animated elements, rotating antenna ears, flashing light mouth, and a chest panel with more animated elements.

Robby the Robot is supposedly powered by "isotope 217". In reality, isotope 217 is a neutron-deficient isotope of uranium (217U), which can be produced by bombarding a 182W target with 40Ar ions and whose existence was first reported in 2000. Isotope 217 is also the name of Chicago-based post-rock/jazz whose first album was called "The Unstable Molecule".