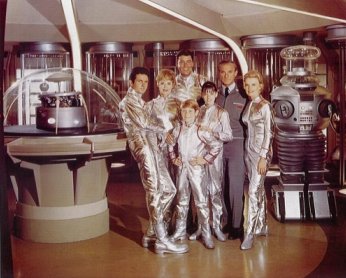 Lost In Space was a TV science fiction series produced by Irwin Allen. In the year 1997, the Robinson family take off in the Jupiter 2, America's first colonization mission to Alpha Centauri. However, a foreign spy, Dr. Zachary Smith, sneaks on board and sabotages the mission by reprogramming the ship's robot to destroy the Jupiter 2 after launch. Smith becomes trapped on board, and the Robinsons save the ship, but not before it's guidance system is damaged and the Jupiter 2 becomes lost in space. The show ran for three seasons (the first in B&W, the rest in color) from 1965 to 1968.

• Professor John Robinson (Guy Williams): commander of the expedition and an expert in astrophysics and applied planetary geology as well as an ordained Minister.

• Doctor Maureen Robinson (June Lockhart): John's wife, the mother of their children, Judy, Penny and Will, and a trained biochemist.

• Judy Robinson (Marta Kristen), Penny Robinson (Angela Cartwright) and Will Robinson (Bill Mumy): the three children in the expedition. Of the three, Will is the most noteworthy – he is the youngest, brightest and a particular friend of Dr. Smith and the Robot.

• Doctor Zachary Smith (Jonathan Harris): ostensibly a specialist in environmental and intergalactic psychology and a Space Corps colonel but in fact an enemy agent. His attempt to sabotage the mission saw him stranded aboard as a "reluctant stowaway", from which the pilot episode takes its title.

• The Robot: a Model B-9 Environmental-Control Robot, which had no given name. The Robot was designed by Robert Kinoshita (who also designed Robby the Robot), and performed by Bob May in a suit built by Bob Stewart, with voice by Dick Tufeld, who was also the series' narrator.

Although it retains a cult following, the science-fiction community often points to Lost In Space as an example of TV's bad record at producing science fiction (perhaps overlooking the series' deliberate fantasy elements), comparing it to its supposed rival, Star Trek. Ironically, Lost In Space was a modest ratings success, unlike Star Trek, which received poor ratings during its original network TV run.

Many of the series' best episodes revolved around the theme of love as a source of strength when confronting hostile aliens or other threats to the family's survival. As John Robinson says at the end of season one, "Love... In all the worlds and galaxies of this universe, there is nothing stronger."

Lost In Space starred several well-known actors. Guy Williams was already a major TV star and had played the lead role in the successful series Zorro; June Lockhart was a well-known actress and had appeared in numerous films since the 1940s, including Sergeant York, Meet Me in St. Louis, and The Yearling; she was also well-known to American TV audiences for her role in the Lassie TV series. Angela Cartwright had recently played one of the Von Trapp children in the classic film musical The Sound Of Music and Billy Mumy was one of America's best-known child actors. He was a TV regular by age six and prior to Lost In Space he had already appeared in at least six feature films and had many notable TV credits including Alfred Hitchcock Presents and The Twilight Zone, where he starred in the classic episode "It's A Good Life", playing a child who suddenly develops terrifying psychokinetic powers. As an adult he was a regular cast member in the Babylon 5 TV series, and one guest appearance on Star Trek: Deep Space Nine, a spin-off of Lost In Space's rival.

Criticisms of the series have targeted its supposed technical implausibility. Unlike Star Trek, where great care was taken to create a detailed and – to its most devoted fans, at least – believable world of future technology, Lost In Space typically paid far less attention to such matters. For example, whereas the Enterprise is a huge, aircraft carrier-sized starship with a crew of several hundred, the Jupiter 2 is evidently only about the size of a small family home, and yet is capable of transporting a crew of six and all the requisite supplies across interstellar space to establish a colony on another planet.

The series has also been criticized because of the notion that the Robinsons and their pilot would tolerate the presence of an unrepentant backstabber such as Doctor Smith, who repeatedly attempts to betray or undermine them for his benefit. Although Smith is often chastised and even banished at times, the Robinsons always, sooner or later, take him back. "Because he's a human being!" as Maureen Robinson says in one episode.

Many viewers found the show quite beautiful, with full-color special effects and spacescapes courtesy of the astronomical community. Like all Allen's productions, stylistically, the series was of high quality, featuring eye-catching silver, tapered space-suits, laser guns and a number of spectacular props and sets, including the control cabin of the Jupiter 2. In some episodes, the Robinsons traveled in "the Chariot" (a full-scale tracked exploration vehicle), or in the "Pod" (a small spacecraft modelled on the Apollo Lunar Module), and the characters also on occasion used what was then an exciting new invention, the jet pack. The Jupiter 2 was evidently modeled somewhat on the spaceship C-57D from the classic '50s sci-fi film Forbidden Planet and it included several recognizable props which had been recycled from Voyage To The Bottom Of The Sea (and which cropped up in several later Irwin Allen series as well).

Although the series' first season took a fairly serious approach, many of the show's second- and third-year episodes were quite juvenile, with stories about space cowboys, space hippies, space pirates, space beauty pageants, and, of course, the infamous episode "The Great Vegetable Rebellion", featuring one of the few intelligent space carrots in cinematic history (two of the show's stars did not appear in the following episode, as punishment for being unable to keep from laughing during the filming of what they saw as a travesty).