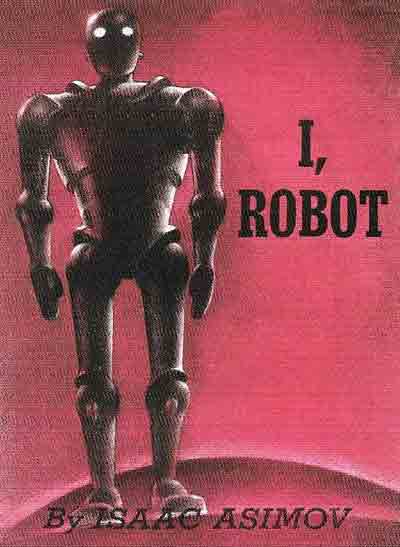 Runaround (1941), the short story in which Isaac Asimov first introduced his Laws of Robotics, was one of nine science fiction short stories featured in his collection I, Robot (1950)

A robot is a mechanical device that sometimes resembles, in whole or in part, a human being and is capable of carrying out a variety of often complex human tasks on command or by being programmed in advance. More generally, a robot, or automaton, is a machine or device that operates automatically or by remote control.

Robots have evolved out of simpler automatic devices, and many are now capable of decision-making, self-programming, and carrying out complex operations. Many have sensory devices. They are widely used in industry for mass production, including welding, grinding, paint spraying, and die casting. They can work in environments that are dangerous or unpleasant to humans, and can perform manipulation tasks faster and more accurately than humans without tiring. As time goes on, advances in artificial intelligence will allow robots to become more flexible, and they will become capable of performing an even greater variety of tasks, decision-making and autonomous operation. They will be equipped with increasingly sophisticated sensors for artificial vision, touch, etc.

The word "robot" is both a coinage by an individual person and a borrowing. It has been in English since 1923 when the Czech writer Karel Capek's play R.U.R. was translated into English and presented in London and New York. R.U.R., published in 1921, is an abbreviation of Rossum's Universal Robots; the word "robot" itself comes from Czech robota, "servitude, forced labor," from rab, "slave." Interestingly, the artificial beings in Capek's play would today be considered more akin to androids rather than robots.

In 1941 the great science fiction writer Isaac Asimov wrote "Runaround", the latest in a series of short stories on robots with positronic, humanlike brains in the era of space exploration. In "Runaround", two astronauts and a robot, SPD-13, are sent to an abandoned mining station on Mercury. While there, a compound necessary to power the station's life-giving photo-cells, selenium, affects SPD-13 and causes him to become confused and unable to operate under the three Laws of Robotics. These laws are: 1) A robot must not injure a human being or allow a human to come to harm, 2) A robot must obey orders given to it by a human, except if that order conflicts with the first law, and 3) A robot must protect its own existence as long as that does not conflict with the First or Second Laws.

Over the course of his career, Asimov's position on the inviolability of the Three Laws varied, from seeing them as mere guidelines through to wholly uncompromising subroutines hot-wired into the robot's brain. The Three Laws lifted robots from the mindless cadre of Frankenstein-like machines and creatures with no guiding principles that had characterized horror and science fiction for decades, and gave them the capacity to wrestle with moral dilemmas. In 1985 Asimov added a fourth law, known as the "Zeroth Law," to precede the First Law: a robot may not harm humanity, or, by inaction, allow humanity to come to harm.

Asimov's law were so highly regarded that it was thought his Three Laws would, in the real age of robotics to come, be a foundational stone in a positronic Brave New World. The reality is that no computer or robot has so far had the Three Laws built into its network. They were, and remain, little more than imaginary literary devices, designed to further the plot of some of the finest science fiction novels ever written.