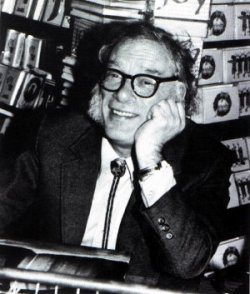 The most exciting phrase to hear in science, the one that heralds new discoveries, is not 'Eureka!' (I found it) but 'That's funny...'. - Isaac Asimov

Isaac Asimov was a prolific Russian-born American author of popular science and science fiction. He published about 500 volumes and is probably best known for his Foundation trilogy (1951–53) and for his short-story collection I, Robot (1950) in which he developed a set of ethics for robots. Asimov received a doctorate in biochemistry from Columbia University in 1948. He later joined the faculty of Boston University, with which he remained associated for the remainder of his life. Among his books on science are Inside the Atom (1956), The Human Brain (1964), The Neutrino (1966), and Our World in Space (1974).

Asimov frequently discussed the likelihood and possible nature of extraterrestrial life in his factual books and articles, notably in Extraterrestrial Civilizations1 (1979) but, with one exception, avoided the topic completely in his novels. Only in The Gods Themselves2 (1972) do they play a major role and then to the extent that they are "among the most fascinating and believable aliens yet imagined in science fiction."3