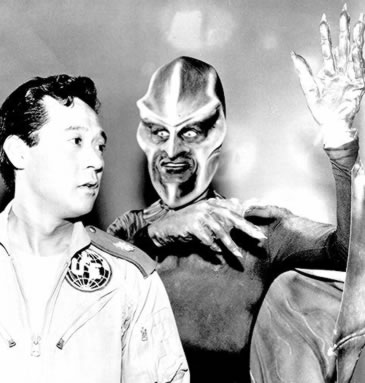 The dawn of the Space Age was preceded by a spate of films in the early 1950s, beginning with Destination Moon (1950), centered on the theme of space exploration. Extraterrestrials also came onto the cinematic agenda at this time, but not simply or even mainly as an accompaniment to the idea of interplanetary travel. To a large extent, the alien films produced during the late Truman and early Eisenhower years captured in metaphor the American fear of Communist invasion and infiltration – a fear that was itself a stimulus and corollary to the first modern wave of UFO sightings in the late 1940s. The threat of take-over by outwardly benign but inwardly hostile agents supplied the emotional cutting edge to such classic monster-alien movies as The Thing (1951), It Came From Outer Space (1953), Invaders From Mars (1953), and Invasion of the Body Snatchers (1956). As Frederic Jameson has noted:1

Arguably, the golden age of the fifties science fiction film with its pod people and brain-eating monsters, testified to a genuine collectiveparanoia, that of the fantasies of the Cold War period ... The enemy within is then paradoxically marked by non-difference. "Communists" are people just like us save for the emptiness of the eyes and a certain automation which betray the appropriation of their bodies by alien forms.

Yet not all the Hollywood aliens of the fifties were menacing in appearance or intent. In The Day the Earth Stood Still (1951), humanity itself that emerges as the source of aggression. The powerful image in this film of a spacecraft landing near the White House may have played a part in inciting the "Washington Invasion" flap of 1952, which in turn, formed the basis of the plot for Earth vs. the Flying Saucers (1956). Aliens were also occasionally depicted as the victims of their own technological ingenuity, thus serving as a moral to our own kind. In This Island Earth (1955), two extraterrestrial races are terminally locked in a devastating interplanetary war, while in The Forbidden Planet (1956) an advanced civilization is found to have destroyed itself through misuse of an intellect-enhancing device.2

The late 1950s and early 1960s saw a lull in serious alien representations on the big screen, but the beginnings of imaginative exploration of the theme on television. The first episode of The Outer Limits (1963–65) concerned a noncorporeal life-form that is accidentally "received" by a radio telescope on Earth. Other aliens from The Outer Limits stable followed, generally of the unpleasant-looking, anthropophobic variety. On British TV, the Quatermass series left a similarly dark and memorable impression of other worldly beings. In 1966 began the Star Trek phenomenon, though none at the time could have imagined how popular or influential it would eventually become. The late 1960s also saw a revival of film interest in extraterrestrials, 1968 being a particularly vintage year with the release of Planet of the Apes and, most notably, 2001: A Space Odyssey, with its remarkably scientifically-authentic special effects and unusually subtle treatment of alien intervention in human affairs. Another notable year for cinematic extraterrestrials was 1977, though the approach adopted in Star Wars (in which the aliens play a tangential and generally humorous role) and Close Encounters of the Third Kind (in which they are central and profound) could hardly be more different. Extraterrestrial benignity continued in E.T.: The Extraterrestrial (1982) but had already been devastatingly contrasted with its polar opposite in Alien (1979). For the most part, the demands of commercialism have precluded complex cinematic inquiries into the possible nature of alien life and intelligence of the type successfully accomplished by Andrei Tarkovsky in Solaris (1972), the film of Lem's novel.3