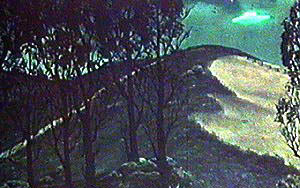 Invaders From Mars is a low-budget, high-impact 1953 science fiction film, by William Cameron Menzies (Academy Award-winning art director of Gone With the Wind), which both reflected and encouraged the xenophobia prevalent in post-War America. In it, a flying saucer lands and buries itself in the ground outside an unsuspecting town. Only a young boy sees its arrival and, of course, at first no one believes his fantastic story. Then people start to disappear – a soldier, the commissioner of police, the boy's parents – only to reappear later having been "taken over". Eventually, the army is called in and the aliens are defeated. The people who had been abducted are returned to normal.

If Hollywood had gone out of its way to produce an anti-Communist propaganda film it could hardly have done a more effective job. The aliens are the communists trying to compel everyone, against their will, to become part of a system in which individuality is crushed and merged with an authoritarian whole. Only American resolve and ingenuity stand in their way. And, naturally, the home side wins; freedom is preserved – for the moment. Although the metaphors seem transparent enough now, when the film was first shown people no doubt enjoyed it simply as pure sci-fi escapism. Nevertheless, the subliminal message (whether it was put there intentionally or not) would have got through and reinforced what everyone already feared: the US, the last great guardian of liberty, was under imminent threat from sinister outside forces.