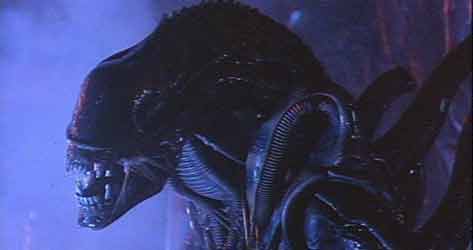 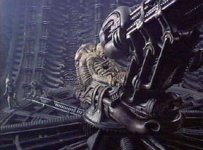 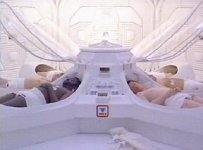 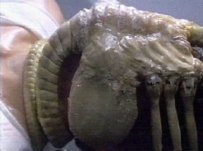 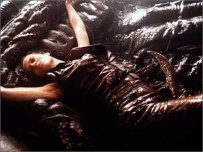 Alien is a memorable and influential motion picture (1979; directed by Ridley Scott), combining aspects of the horror and science fiction genres, in which an ultra-predatory, intelligent extraterrestrial terrorizes the human crew of a merchant spaceship. A direct descendant of Well's Martian monsters in The War of the Worlds, the repellent creature in Alien – designed, along with much of the set, by the Swiss surrealist painter H. R. Giger – stands at one extreme of speculation about what life on other worlds might be like and epitomizes the fears of those who have voiced opposition to attempts at interstellar communication (CETI, opposition to). Alien is also notable for its underlying themes of motherhood, penetration, and birth, and for Sigourney Weaver's portrayal of reluctant hero Ellen Ripley. It spawned three sequels – Aliens (1986), Alien 3 (1992), and Alien Resurrection (1997). It contrasts sharply with the portrayal of intelligent aliens in E.T.: the Extraterrestrial.

Returning from a deep-space mission, the crew of the mining freighter Nostromo is woken from suspended animation by what appears to be an SOS call from a planetary system they are passing through.

They descend to the planet's surface and discover an enormous derelict spaceship – the apparent source of the transmission. Three of the crew go to explore. Inside the craft they find the remains of the ship's pilot with a gaping hole in his rib cage, his rib bones bent outward. Meanwhile, Ripley, who has remained on the Nostromo manages to decode the SOS and finds it to be a warning. But the away team is out of communications range.

One of the crew enters the alien ship's hold and discovers thousands of strange alien eggs. While examining one of these, it hatches and the parasite within attacks him, fixing itself to his face. After returning to the Nostromo the crew takes off to head for Earth. The "face-hugger" parasite subsequently dies and all seems well again. But what no one knows is that it has implanted an alien embryo within its host. This quietly develops until, during a meal the crew are having before going back into suspended animation, it spectacularly emerges through its victim's chest. The creature scuttles away and subsequently grows and develops rapidly into a hideous, vicious predator. Trapped inside their spacecraft, the crew are now in serious trouble ...


Other films in the series

1986 sequel to Alien. In it, Ripley and a crew of marines are sent to destroy an army of aliens that has infiltrated a small colony. Commercially orientated but technically adroit sequel to Alien. A special edition was later released on video which included 17 minutes of previously unseen footage.

1992 addition to the series in which Ripley unwittingly unleashes an alien on a distant planet, now being used as a prison for murderers and rapists. Slick-looking but imperfectly scripted film whose production problems were well documented at the time. Something of a disappointment compared to the first two entries.

Released in 1997. Ripley is cloned so that scientists can remove the alien growing inside her for experimentation and breeding purposes. Inevitably the newly bred creatures escape and run amok. The fourth Alien movie is an improvement on episode three, being more akin to the action-orientated second installment. Unfortunately, the story becomes increasingly foolish as it progresses and there are also some uncertain moments in the editing and continuity.

Prequel, scheduled for release in the summer of 2011, in which the back-story of the mysterious pilot discovered by the crew of the Nostromo is revealed.

One of the nastier aspects of the Alien predator is its secondary jaw which can be thrust rapidly forward into its victim's face or body. In 2007, researchers at the University of California at Davis were amazed to discover that the moray eel can shoot a set of secondary jaws into its mouth to grasp its prey and pull it back into its throat (see bottom illustration).

Rita Mehta and colleagues discovered the eel's special feeding ability through high-speed digital cameras that captured the second jaw as it thrust forward while feeding. The so-called pharyngeal jaw, which normally resides in the animal's pharynx, can travel from the pharynx into the mouth at lightning speed, giving the prey no chance of squirming free from the first set of jaws.

Another creature with an Alien-like retractable jaw is the goblin shark, or Mitsukurina owstoni, which lives at depths of 100 to 1,000 m. Its common name comes from the Japanese, who nicknamed it after long-nosed supernatural creatures known as the tengu. Goblin sharks have been found in water off Japan, New Zealand, Surinam, France, and Portugal, as well as in the North Pacific and the Gulf of Mexico. The prey they snare with their unearthly jaws includes teleost fish and squid.