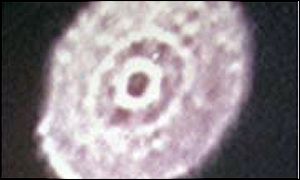 A UFO allegedly captured on video over Derbyshire, England, in 1999.

The term UFO dates back only as far as 1952. Mysterious aerial phenomena, however, have been reported on and off for centuries. The notion that unidentified objects or lights in the sky might be craft from other worlds appears to have been first suggested following the earliest wave of such sightings – that of the "mystery airships" – in 1896-97. Perhaps it is no coincidence that this wave came at a time when the American astronomer Percival Lowell was advocating the existence of an advanced race on Mars and there was increasing discussion of the feasibility of heavier-than-air flight.

The modern debate about the nature of UFOs began in 1947 with Kenneth Arnold's sighting of the first so-called "flying saucers" (see also Cold War, linked to UFO reports). Explanations for the saucers, or "flying disks" as they were also known at the time, included natural phenomena, such as Venus or unusual clouds, illusions, hoaxes, balloons, prototype aircraft and secret weapons (friendly or hostile), and the extraterrestrial hypothesis – the belief that at least some UFOs are extraterrestrial spacecraft.. The last possibility was not initially given much credence but rapidly gained favor as a result of intense media speculation.

From the outset, the systematic investigation of UFOs was made problematic by the fact that the alleged phenomenon was both transient and unpredictable. Although data were plentiful, these largely took the form of individual and uncorroborated eyewitness reports – a notoriously unreliable source of information. Yet enough sightings were made by what appeared to be reliable, experienced observers, including military personnel and police officers, for the phenomenon to be taken seriously (see Roswell Incident; Mantell, Captain Thomas F.). The United States military, concerned about a possible threat to national security and following the recommendations of General Twining, launched the first of its investigations, Project Sign. This was followed by Project Grudge and, finally, beginning in 1952, Project Blue Book. J. Allen Hynek, the astronomical consultant for Blue Book devised a classification scheme for UFO reports.

Although military and CIA interest in UFOs declined steeply after the "Washington Invasion" of 1952, public interest was maintained by the increasingly sensational claims of amateur investigators such as Donald Keyhoe and "contactees" such as George Adamski. A large body of saucer mythology began to accrete around claims of government cover-ups and certain improperly explained sightings. Meanwhile, professional scientists continued, with a few notable exceptions such as Donald Menzel, to distance themselves from the subject.1-4

This website maintains a skeptical but open-minded stance with respect to UFOs. There clearly are many reports of unidentified objects and lights in the sky. The great majority of these can probably be accounted for in terms of (a) hoaxes, (b) misidentifications of mundane natural phenomena (Venus, clouds, etc.) or artificial phenomena (aircraft, satellites, etc.), (c) advanced prototype military planes, and (d) poorly understood natural terrestrial phenomena, such as earthlights or ball lightning. Whether there is a residue of cases that provides evidence of artificial extraterrestrial objects remains to be seen. It is just as unscientific to dismiss such a possibility out of hand as it is to accept it without rigorous exclusion of all other, less exotic explanations.

Distinct from ufology is a branch of SETI (Search for Extraterrestrial Intelligence) known as SETV(Search for Extraterrestrial Visitation), which is largely focused on theory and observation connected with the possibility of extraterrestrial probes within the Solar System. Unfortunately, a perceived connection between this field and UFO lore has tended to make orthodox SETI researchers shy away from involvement in local searches for ETI. However, there are signs that this unjustified discrimination is slowly coming to an end.

Abstract: In 1977 President Carter's Science Advisor recommended that a small panel of inquiry be formed by NASA to see if there had been any new significant findings on UFOs since the US Air Force- sponsored investigation of UFOs ("Condon Report") a decade later. Five months later, NASA responded to that recommendation by proposing "to take no steps to establish a research activity in this area or to convene a symposium on the subject." This article offers a partial inside look at how that decision was made at NASA.

Abstract: Refereed journals, to which scientists turn for their reliable information, carry virtually no information on the UFO problem. Does this imply that scientists have no views and no thoughts on the subject, or that all scientists consider it insignificant? Does it imply that scientists have no reports to submit comparable with UFO reports published in newspapers and popular books? The purpose of this survey was to answer these questions. Note: Sections 1-3 and the Appendices were published in Vol. 8, No. 1 of the Journal of Scientific Exploration. Section 4.1-4.3 appeared in Vol. 8, No. 2, and Section 4.4-4.9 was published in Vol. 8 No. 3.