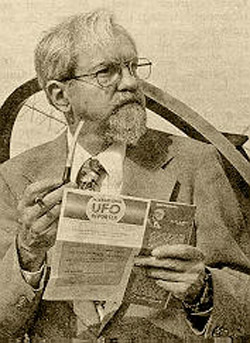 J. Allen Hynek was an astronomy professor at Ohio State University, who went on to become Associate Director of the Smithsonian Astrophysical Observatory (1956), and chairman of the Astronomy Department at Northwestern University (1960).

He is best remembered, however, for his involvement with research into unidentified flying objects. This began in 1949 when he was invited by the US Air Force to become the astronomical consultant to Project Grudge, based at nearby Wright Field (later Wright-Patterson AFB), in Dayton. He continued in this position with the subsequent and much longer Project Blue Book, gradually shifting over the years from a position of extreme skepticism to one in which he believed that UFOs represent "an aspect or domain of the natural world not yet explored by science." In 1973, four years after the cancellation of Project Blue Book, Hynek founded the Center for UFO Studies (CUFOS), based in Chicago. He also served as technical advisor to the producers of the film Close Encounters of the Third Kind.1, 2

A nocturnal light is defined as any light or lights in the night sky that cannot be explained in terms of aircraft, astronomical objects, or any other familiar luminous source.

A daylight disk is defined as an aerial object seen at a distance during the daytime that does not appear to correspond with any known natural or artificial phenomenon.

A radar-visual UFO is defined as a UFO tracked on radar and simultaneously seen visually at the same location.

Abstract: Over a period of years, diverse aerial sightings of an unusual character have been reported. On the assumption that the majority of these reports, often made in concert, come from reputable persons, and in the absence of any universal hypotheses for the phenomena which stimulated the reports, it becomes a matter of scientific obligation and responsibility to examine the reported phenomena seriously despite their seemingly fanciful character. Accordingly, several hundred serious reports of "unidentified aerial objects" have been studied in detail in an attempt to get a pattern classification. It appears that those reported phenomena which do not admit of a ready and obvious explanation exhibit fairly well-defined patterns and that these are worthy of further study. One pattern in particular, that of a hovering nocturnal light, does not appear to be readily explainable on an astronomical basis or by mirages balloons or by conventional aircraft.