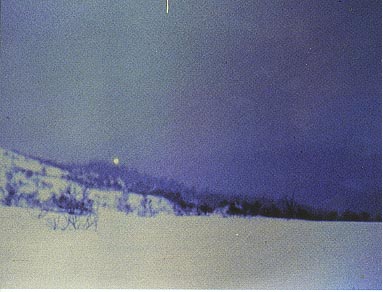 A large light hovers over a peak in Hessdalen, Norway.
Photo by Leif Havik/Project Hessdalen.

It was that eccentric American collector of anomalous material, Charles Fort, who compiled the first catalogue of reports of mysterious lights in the sky, long before anyone had thought to equate such manifestations with alien spacecraft. In fact, for all his many bizarre ideas, Fort had literally a down-to-earth view of what the luminous phenomena might be and noted a possible geographical connection between them and regions prone to earthquakes and tremors. The name "earth lights" was coined much more recently by British researcher Paul Devereux, author of the only two full books on the subject.1, 2

In 1954, F. Lagarde matched the centers of activity in a French wave of unidentified flying objects to the location of geological faults. Two decades later, Canadian researchers Michael Persinger and G. Lafreniere, found a similar pattern of correlation between UFO reports and sites of tectonic disturbance in North America. At Hessdalen, southeast of Trondheim, in Norway, geologist Erling Strang has been monitoring earthlights since the early 1980s, tying the visual phenomena to local variations in the Earth's magnetic field (see link below). Strang has found that a typical apparition is matched by a 1,000-fold increase in magnetometer readings.

The most violent tectonic events on Earth happen where oceanic crustal plates and continental plates meet. One such place is in the northwest of the United States where a plate under the Pacific Ocean is diving below the continental US. This movement has lifted up the Cascades – a chain of volcanoes, whose ability to burst spectacularly into life was demonstrated most recently by the Mount St. Helens eruption. The Cascade peaks are linked by fault lines and it was over these very mountains that Kenneth Arnold saw the objects that were destined to become the archetypal "flying saucers".

From every continent come reports of a similar nature. In west Africa, balls of light seen gliding over the surface of water are called "aku" – the devil. In Malaysia, aerial lights known as "penangau" are believed to be the phantom heads of women who died in childbirth. And in the northwest Australian outback, the so-called "min-min" lights have a sacred significance to the Aborigines.* That earthlights exist is virtually beyond doubt. That they are linked in some way to tectonic activity and to sudden surges in ambient magnetic field strength is on the way to becoming firmly established. But what remains unknown is the mechanism by which the lights are created and sustained. In some cases, earthlights have been seen to persist for up to two hours. Whatever is behind the phenomenon, it is certainly not a sudden, momentary electrical discharge like that of a lightning strike.

Laboratory studies have offered a few tantalizing clues. In 1981, at the request of Michael Persinger, Brian Brady of the US Bureau of Mines carried out an experiment in Denver in which a granite core was crushed in darkened conditions and filmed in slow motion. Afterwards, the researchers observed lights on the film, flitting out from the decaying core and moving around the chamber of the rock-crusher. These were only tiny, transient events. Great slabs of rock grinding against each other on either side of a fault would release vastly more energy. What is not clear, however, is how the energy source generating the earthlights could be maintained and directed for long periods. One problem is that the Earth is a good conductor and allows any local build-up of charge to leak rapidly away. This makes it difficult to explain how the charge around an active fault could remain in place long enough to drive a lengthy UFO display on the surface or in the sky above.

Some preliminary ideas have been put forward. According to John Derr, of the US Geological Survey,3, 4 the presence of water in the rocks may be crucial. Heat produced by tectonic movement, he argues, creates sheaths of steam which coat the edges of the fault. These sheaths serve to insulate the build up of charge at the center of the fault from the conducting rocks further out. Eventually, enough charge accumulates for it to burst out into the atmosphere and give rise to a visible display. This model, however, falls short of explaining either the duration or the peculiar behavior of earthlights.

The Egryn lights were unusual lights seen near the Welsh village of Egryn in the winter of 1904. According to one eyewitness: "Between us and the hills, apparently two miles away, there suddenly flashed forth an enormous luminous star with intensely brilliant white light and emitting from its whole circumference dazzling sparkles." Another said: "[It was] poised in midair, a mass of fire of every conceivable color spreading on all sides and descending into a rainbow shower to the surface of the mountain." Even more spectacular events were seen in the vicinity of some ancient megalithic remains in the neighborhood. From the ground, several multicolored columns of light sprang, two to three meters high. One of these appeared to flutter, as if there were some internal instability, and then started to produce spheres of light which slowly rose up its length before exploding at the top. It has been suggested that the people who once lived in these parts, over 3,000 years ago, may have witnessed something similar, and, interpreting it as a supernatural event, built stone edifices to mark the locations where the lights had appeared. It is at least an intriguing possibility that these and certain other prehistoric monuments were purposely erected close to where unusual, energetic events take place on the planet. And this, in turn, provides at least a plausible basis for the seemingly outlandish claims of a link between the flight paths of UFOs, currents of energy flowing in the earth, and the arcane knowledge of lost civilizations.

Drawing on reports from December 1904 to March 1905 of the lights near Egryn and also those seen several kilometers to the north and south, writer and independent researcher Paul Devereux plotted on a large-scale map the exact location of each sighting. He then sought the advice of professional geologists who pointed out the existence of a major, deep-seated fault, the Mochras Fault, running north-south between the coastal towns of Harlech and Barmouth and passing almost directly under the village of Egryn. When Devereux compared the places where the earthlights had been observed with the path of the fault he found a striking correlation: the reported sightings were strung out like beads on a thread. Checking the geological records, Devereux learned that the area had been subject to tremors immediately around and after the occurrence of the lights, culminating in a minor earthquake under the southern Welsh town of Swansea in 1906.1 Similar seismic activity in the Cascades may have been responsible for the "flying saucers" seen by Kenneth Arnold in 1947.

The Marfa Lights are unusual multicolored displays of aerial luminosity reportedly often seen near the town of Marfa, Texas. They may have a mundane explanation (car headlights, for instance) or, possibly, be examples of so-called earthlights. They are seen on such a frequent basis that the residents of Marfa hold an annual jamboree called the 'Festival of Lights' to celebrate the phenomenon. As, in the case of the Roswell Incident, the number of visitors attracted by the purported phenomenon is certainly good for local business, whatever the ultimate explanation.

Abstract: Unexplained plasma-like atmospheric "light balls" are observed at very low altitudes during alternate phases of maximum and minimum in the Hessdalen area, located in central Norway. Several theories are presented in order to explain the observed phenomenon; among these: piezoelectricity from rocks, atmospheric ionization triggered by solar activity, cosmic rays and extraterrestrial visitation. The presented study is aimed at proposing the use of a dedicated instrumental set-up, research experimental procedures and methods in order to prove or disprove every single theory: in this context several kinds of observational techniques, measurement strategies and physical tests of tactical relevance are discussed in detail. An introduction on any considered theory is presented together with a detailed discussion regarding the subsequent experimental phase. For each specific theory brief descriptions of the observable parameters and of the essential instrumental choices and a detailed discussion of measurement procedures coupled with suitable flow-charts, are presented.

I'm originally from Argentina now living in Puerto Rico. I was astonished to see about the earthlights, especially this paragraph:

"From every continent come reports of a similar nature. In west Africa, balls of light seen gliding over the surface of water are called "aku" – the devil. In Malaysia, aerial lights known as "penangau" are believed to be the phantom heads of women who died in childbirth. And in the northwest Australian outback, the so-called "min-min" lights have a sacred significance to the Aborigines."

Tthere are reports from people who live in the central Argentine "pampas" that refer to this same phenomenon. People who live there call it "luz mala" (that is bad light) and they respect it up to the limit of fear because are believed to be ghost of evil people who died near the place.

I myself saw one when I was traveling across the pampas. It looked much like a big cloud burning.

Some people think that the "luz mala" is nothing more than methane clouds combined with some sort of light refraction effect (like the same visual effect when seeing an empty road at the distance, you see 'water').