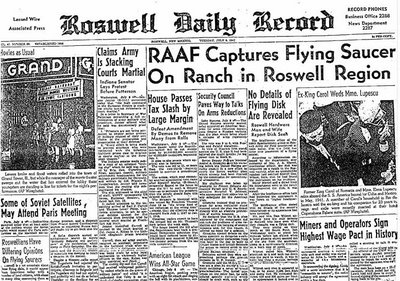 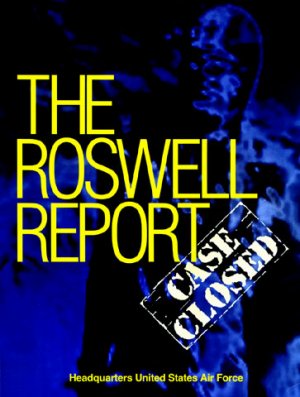 The Roswell Incident is the most widely discussed series of events and purported events in the annals of ufology. It has now achieved the status of a major modern myth.

On June 14, 1947, ten days before Kenneth Arnold's seminal sighting of "flying saucers," William "Mac" Brazel came across some debris scattered across a 200-m swathe of field, while doing rounds on the Foster Ranch, 120 km (75 miles) northwest of Roswell, New Mexico. Later, accompanied by his wife and two children, he returned to the scene, collected some of the fragments and took them home. Not having access to a radio or phone, it was only on July 5, when Brazel drove into the nearby town of Corona, that he heard news of Arnold's saucers and the many subsequent reports of mysterious disks in the skies over America.

Two days later, while in Roswell to sell wool, Brazel dropped in at the office of Sheriff Wilcox and confided that he might have come across the wreckage of a disk. Wilcox contacted Major Jesse Marcel, the group intelligence officer for Roswell Army Air Field (RAAF), home to what was then the world's only atomic bomb squadron, who subsequently drove out to the Foster Ranch with Counter-Intelligence Corps Officer Sheridan Cavitt to inspect the crash site and collect the debris that Brazel had found. The following day an extraordinary press release was put out on the orders of Colonel Blanchard, RAAF's base commander:

The many rumors regarding the flying disks became a reality yesterday when the intelligence office of the 509th bomb group of the eighth air force, Roswell Army Air Field, was fortunate enough to gain possession of a disk through the cooperation of one of the local ranchers and the Sheriff's office of Chaves county. The flying object landed on a ranch near Roswell sometime last week... It was inspected at the Roswell Army Air Field and subsequently loaned by Major Marcel to higher headquarters.

The Army Air Force has announced that a flying saucer has been found and is now in possession of the army. Army officers say that the missile ... has been ... sent to Wright Field, Ohio, for further inspection. Russia has demanded UN action ...

Swiftly, the news spread around the globe. Editors of major newspapers in London, Paris, Rome, and Tokyo bombarded the normally quiet editorial offices of Roswell's two local papers with calls for more details.

While this was happening, Marcel had flown with his crash samples to the headquarters of the Eighth Air Force at Forth Worth, Texas. There the incident was to take another abrupt and unexpected turn. Brigadier-General Roger Ramey, commanding officer, hurriedly convened a press conference at which Marcel displayed what was said to be the material brought from Roswell while the base Duty Weather Officer explained that the fragments were from a radar targeting balloon used for meteorological purposes.

As two official investigations into the incident would conclude, four decades later, this story was invented to conceal a military secret..

The Roswell GAO report (Fig 2) is the outcome of an independent inquiry by the General Accounting Office (GAO), the investigative arm of the US Congress, into the Roswell Incident almost half a century earlier. Published in July 1995, the report effectively closed the casebook on the matter - at least, at an official level. Its conclusion: the Air Force was now telling the truth. The crash had not involved a weather balloon as originally claimed but a covert military balloon intended to supply early warning of a nuclear attack. Bizarrely, some of the minor components of the balloon's payload had been supplied by a New York novelty company whose fancy labels were misinterpreted by eyewitnesses at the crash site as alien inscriptions. The GAO also concluded that a document known as "Majestic 12," which some UFO buffs claim is a secret government document outlining procedures to be followed when handling the putative Roswell craft and its occupants, is a forgery.

In July 1994, the US Air Force released the results of its own investigation into the Roswell Incident of 1947 and concluded that while the original official account of a crashed weather balloon was indeed a cover-story, there was no reason to suspect extraterrestrial involvement. In The Roswell Report: Case Closed, the Air Force investigators state that "Project Mogul offers the most likely explanation for the Roswell Incident" (see Mogul, Project). In particular, the finger of suspicion is pointed at Flight 4 of this secret Pentagon program as being the source of the debris which spawned the myth of a crashed flying saucer.

According to the project's director, Flight 4 was launched on June 4, 1947 and never recovered. Its last airborne position, as recorded by a B17 that had been tracking it, was about 27 km from the site where wreckage was found 10 days later. "This research indicated absolutely no evidence of any kind that a spaceship crashed near Roswell or that any alien occupants were recovered therefrom," concluded Richard Weaver, director of security at the Air Force.