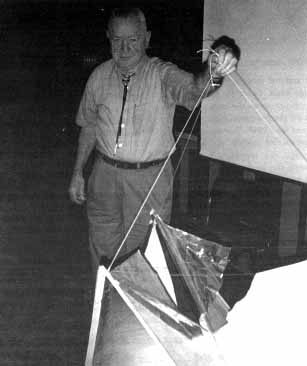 Charles Moore displays a radar reflector similar to those flown from trains of balloons in Project Mogul.

Project Mogul was a secret program conducted by the US Air Force and directed by Charles B. Moore in the late 1940s to develop balloon-borne equipment capable of giving early warning of distant Soviet nuclear explosions. Large helium-filled balloons were attached to instrument arrays and launched from Alamogordo Army Air Field in New Mexico in Jun and early July 1947 into the stratosphere where the acoustic signals from a remote nuclear detonation would have been detectable. They may have been responsible for a number of UFO reports around the time of the flying saucer flap of 1947. In particular, the 1996 Air Force investigation of the Roswell Incident concluded that the crash of New York University Flight #4, which carried three radar reflectors as shown in the photo and, before being lost, was tracked to within 17 miles of the spot where rancher Mac Brazel later recovered debris, was probably to blame. Somewhat bizarrely, the purplish flowers noted by the rancher who discovered the Roswell wreckage, and later referred to by others more luridly as "alien hieroglyphics", turned out to be decorations by the New York toy manufacturer who had supplied the tape used in assembling the arrays.1