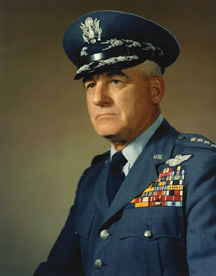 General Nathan Twining was head of Air Material Command (AMC) at the time of the flying saucer flap of 1947. On Sep 23, 1947, Twining sent a memo to Brigadier-General George Schulgen, Commanding General of the United States Air Force, summarizing what were then AMC's opinions on the phenomenon of "flying disks." These included that:

a. The phenomena reported is something real and not visionary or fictitious.

b. There are objects probably approximately the shape of a disc, of such appreciable size as to appear to be as large as a man-made aircraft.

c. There is the possibility that some of the incidents may be caused by natural phenomena, such as meteors.

d. The reported operating characteristics such as extreme rates of climb, maneuverability (particularly in roll), and action which must be considered evasive when sighted or contacted by friendly aircraft and radar, lend belief to the possibility that some of the objects are controlled either manually, automatically or remotely.

Twining asked for the following points to be considered:

1. The possibility that these objects are of domestic origin-the product of some high security project not known to . . . this command.

2. The lack of physical evidence in the shape of crash recovered exhibits which would undeniably prove the existence of these objects.

3. The possibility that some foreign nation has a form of propulsion, possibly nuclear, which is outside of our domestic knowledge.

Headquarters, Army Air Forces issue a directive assigning a priority, security classification and code name for a detailed study of this matter ...

On December 30, 1947, Twining's recommendation was put into effect with the launch of Project Sign.

Twining was born in Monroe, Wisconsin. He began his active service in Jun 1916, with Company H of the Third Oregon Infantry (National Guard) and served as a corporal on Mexican border duty until Sep. In Mar 1917, he was recalled to active duty as a sergeant in the same organization and was promoted to first sergeant the following month. In May 1917, he received an appointment through the Oregon National Guard and entered the US Military Academy. He graduated in Nov 1918, as a second lieutenant of Infantry and remained assigned to the Academy as an officer cadet until Jun 1919.

In Jul 1919, Twining joined the American Forces in Germany as a military ground observer and toured Belgian, French and Italian battlefields. He entered the Infantry School at Fort Benning, Ga., in Sep 1919, graduated the following June, and was assigned to the 29th Infantry Regiment at Fort Benning. In Feb 1922, he was assigned as aide to Brig. Gen. B. A. Poore and served with him at Camp Travis, Texas; Fort Logan, Colo.; and Fort Sam Houston, Texas. His air training began in Aug 1923, when he entered Primary Flying School at Brooks Field, Texas.

Twining graduated from Advanced Flying School at Kelly Field, Texas, in Sep 1924, and then returned to Brooks Field, Texas, as an instructor. On Nov 16, 1926, he was transferred to the Air Service and the following Sep he was reassigned to March Field, Calif., where he served as a flying instructor. In February 1929, he joined the 18th Pursuit Group at Schofield Barracks, Hawaii, where he served successively as adjutant, personnel officer, headquarters detachment commander and commander officer of the 26th Attack Squadron.

Twining was ordered to Fort Crockett, Texas, in Mar 1932, and was assigned to the Third Attack Group as a squadron commander; that August he joined the 90th Attack Squadron and a month later, the 60th Service Squadron at the same base. He became engineering officer for the Central Zone (US Army Air Mail Service) in Chicago, in Feb 1934, and then returned to Fort Crockett in June, where he became adjutant to the Third Attack Group. In Mar 1935, he became assistant operations officer of the Third Wing at Barksdale Field, La. In August, he entered the Air Corps Tactical School at Maxwell Field, Ala., and completed the course a year later.

In Aug 1936, Twining entered the Command and General Staff College at Fort Leavenworth, Kan., and graduated the following June. He was named Air Corps technical supervisor at San Antonio Air Depot, Duncan Field, Texas, in Jul 1937. In Aug 1940, he was reassigned to the Office of the Chief of Air Corps in Washington, DC, as assistant chief of the Inspection Division. Three months later, he became chief of the Technical Inspection Section in the same office. He joined the Operations Division in Dec 1941, was named assistant executive in the Office of Chief of Air Corps in Feb 1942, and three months later was appointed director of War Organization and Movements in that office.