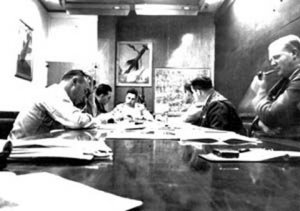 Project Sign was the first official investigation, carried out by the US Air Force, into reports of 'flying disks.' Project Sign (officially known as Special Project HT-304) was established on December 30, 1947, in response to the massive wave of sightings that year and following recommendations by Lieutenant-General Nathan F. Twining, the head of Air Materiel Command (AMC). It was staffed by members of AMC's Technical Intelligence Division, based at Wright Field (now Wright-Patterson AFB), Dayton, Ohio, and began work on January 22, 1948.

At the outset, the consensus among Sign researchers seems to have been that the flying disks (UFOs) were real and were most likely advanced Soviet aircraft, possibly developed from German prototypes captured at the end of World War II. During the 368 days of Sign's existence, however, opinion shifted to the extent that in a secret document entitled, Estimate of the Situation, which reached USAF Chief of Staff General Hoyt S. Vandenberg in early October 1948, it was suggested that the extraterrestrial hypothesis offered the best solution to the mystery of the flying disks. Vandenberg rejected this conclusion, the document was declassified a few months later, and all copies of it were ordered burned. When the destruction order became public knowledge, in the mid-1950s, it served to inflame a growing belief that the government was orchestrating a cover-up as to the true nature of UFOs. Subsequent denials by the Air Force that the Estimate document had ever existed only further exacerbated the situation. Following Vandenberg's rejection of the extraterrestrial hypothesis, supporters of this view at Sign were gradually reassigned to other duties until skeptics became the majority. In its final report, Project Sign expressed itself

It is hard to believe that any technically accomplished race would come here, flaunt its ability in mysterious ways and then simply go away ... Only one motive can be assigned; that the spacemen are "feeling out" our defenses without wanting to be belligerent. If so, they must have been satisfied long ago that we can't catch them... Although visits from outer space are believed to be possible, they are believed to be very improbable. In particular, the actions attributed to the "flying objects" reported during 1947 and 1948 seem inconsistent with the requirements for space travel. On February 11, 1949, Project Sign gave way to its successor, Project Grudge.