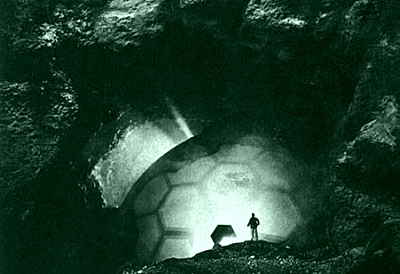 Alien invasion and subversion became popular themes in American and British (though not Russian) science fiction during the Second World War and the Cold War years that followed (see Cold War, linked to UFO reports). John W. Campbell's "Who Goes There?" served as an inspiration for many subsequent tales of aggressive extraterrestrial monsters and shape-shifters, both in print and film. Paranoia and the fear of loss of self-identity, engendered both by the perceived communist threat and the reactionary right-wing excesses of McCarthyism found ample expression in the alien motif. Robert Heinlein's The Puppet Masters, for example, envisages slug-like parasites which fasten themselves to their victim's back and thereafter assume control over the person's body and brain. The idea of individuals being "taken-over," or invasion by insinuation, also underlies Jack Finney's The Body Snatchers, better known for its two cinematic interpretations in Invasion of the Body Snatchers. The postwar years, however, also saw further exploration of the more optimistic concept of advanced extraterrestrials as facilitators of future human evolution. This became a favorite theme of Arthur C. Clarke, as exemplified in his short story "The Sentinel" – the inspiration for 2001: A Space Odyssey – and Childhood's End. As for the aliens themselves, portrayals of their possible forms, habitats, behaviors, and minds, became ever more adventurous and diverse. James White's Sector General stories, set in a huge space-station/hospital on the Galactic rim, ingeniously and humorously depicts the medical dramas that accompany the treatment of all manner of exotic species, while Hal Clement, Larry Niven, and Robert Forward were among those to speculate on life in the most unexpected and bizarre locations. Other writers, such as Stanislaw Lem and Ray Bradbury, used aliens as a means of throwing into sharp relief humanity's own strengths and weaknesses. The consequences of first contact were also investigated, by Fred Hoyle, James Gunn, Carl Sagan, and others, often leading to disquietening conclusions.