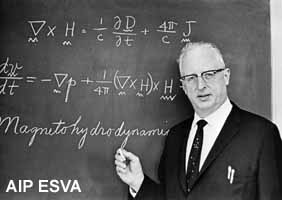 Donald Menzel was an American astrophysicist best remembered for his important solar and planetary work. An authority on the Sun's chromosphere, he discovered with J. C. Boyce (1933) that the Sun's corona contains oxygen. With W. W. Salisbury, in 1941, he made the first of the calculations that led to radio contact with the Moon in 1946. With Fred Whipple, in 1955, he proposed a maritime model of Venus. From 1926 to 1932 Menzel worked at the Lick Observatory; in 1932 he joined the faculty at Harvard, where he became professor (1938) of astrophysics and director (1954–66) of the Harvard College Observatory.

Menzel openly argued the case against the extraterrestrial hypothesis almost single-handedly, in the 1950s and '60s, first presenting his opinions on unidentified flying objects to Air Force officials in April 1952. Although he believed that the many reported sightings could be explained by mundane objects, he "saw no strong reason against the idea that planets inhabited by super-beings should not exist in great abundance" in the universe.1, 2, 3