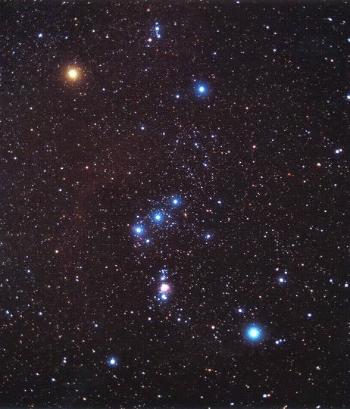 Alnitak is the left-hand star in Orion's Belt. Image: NASA.

Alnitak (Zeta Orionis) is the left hand star in Orion's Belt, the fifth brightest in the whole of Orion, and (in terms of apparent magnitude) the brightest O star in the sky. Its Arabic name comes from a phrase meaning "the belt of al Jauza." A B-type companion lies about 3 arcsec away, the pair orbiting each other with a period of several thousand years.

Like all O stars, Alnitak is a source of X-rays that seem to come from a stellar wind that blows from its surface at nearly 2,000 km/s. The X-rays are produced when blobs of gas in the wind crash violently into one another. Alnitak is probably only about 6 million years old and will eventually become a red supergiant before exploding as a supernova. In its vicinity are several dusty interstellar clouds, including, to the south, the Horsehead Nebula.