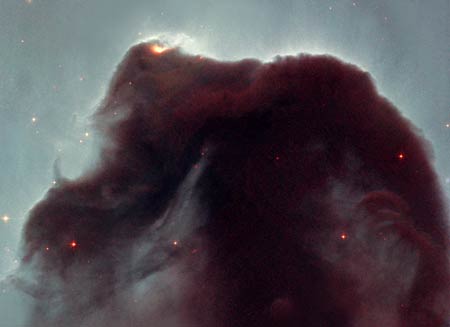 The Horsehead Nebula, also known as Barnard 33 (B33), is a dark nebula in the constellation Orion that projects into the bright nebula IC 434 south of the star Alnitak (Zeta Orionis) in Orion's Belt. It can only be seen well on long-exposure photographs and is often used by amateur astronomers as a test of their observing skill. Its unusual shape was first discovered on a photographic plate in the late 1800s. The Horsehead is similar in form and nature to the famous pillars of dust and gas known as the Eagle Nebula – both are tower-like cocoons of young stars.

The Horsehead Nebula was the clear winner among more than 5,000 Internet voters, who were asked in 2000 to select an astronomical target for the Hubble Space Telescope to observe. The image (below) subsequently acquired by Hubble shows a region of the nebula measuring 2.2 light-years (0.67 pc) across in the horizontal dimension.