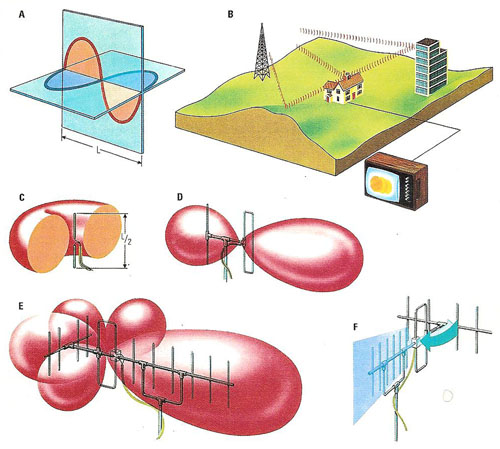 The signal emitted by a transmitting antenna (A) can be visualized as a magnetic and an electrical sine wave perpendicular to one another. The electrical wave, which carries television signals, is shown to be vertical and this situation is known as vertical polarization. The most favorable length of antenna to receive this signal is ½L. An antenna may receive a direct signal as well as a number of reflected signals. The effect of this is to produce a multiple image called ghosting (B). This is because a plain antenna is equally receptive in al directions and the shape representing this is shown in C. This defect can be partially overcome by the addition of a reflector (D), or a system of reflectors and directors (E). The effect is to make the antenna sensitive in the forward direction. The mechanism of the directors is to concentrate the incoming wave and the reflector behaves in the same way as a mirror (F).

An antenna is a device for collecting (receiving) or transmitting (radiating) radio signals, the design of which depends on the wavelength and amplitude of the signals. In essence a transmitting antenna is a combination of conductors which converts AC (alternating current) electrical energy into radio waves.

The simple dipole consists of two straight conductors aligned end on and energized at the small gap which separates them. The length of the dipole determines the frequency for which this configuration is most efficient. It can be made directional by adding electrically isolated director and reflector conductors in front and behind.

Other configurations include the folded dipole, the highly-directional loop antenna, and the dish type used for microwave links.

Receiving antenna can consist merely of a short dielectric rod or a length of wire for low-frequency signals. For VHF and microwave signals, complex antenna configurations similar to those used for transmission must be used.

A directional antenna is a radar or radio antenna that radiates or receives radio waves in a narrow beam, i.e., in one prime direction. A radio direction-finder, for example, has a rectangular loop antenna that receives maximum signal when it is broadside to the station, and minimum signal when it faces the station end-on. The orientation of the antenna is indicated on a direction scale.

Directivity is the ratio of the maximum sensitivity of an antenna to its average sensitivity. It varies directly as the effective aperture of the antenna and inversely as the square of the wavelength.