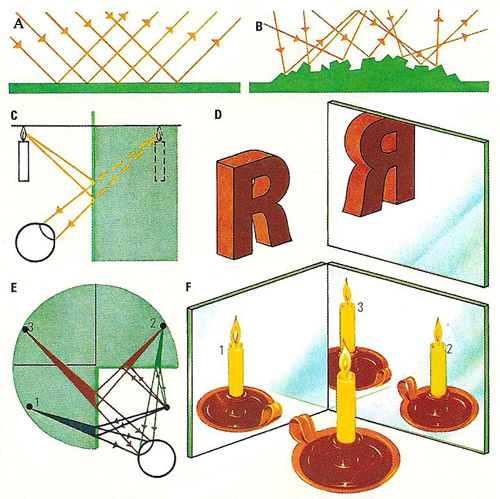 A plane mirror reflects all light rays at the same angle (A), whereas a matt surface (B) scatters light. The brain imagines that light rays reaching the eye from a mirror come to it in straight lines, and it therefore sees an image at that point where the rays would originate if their paths were not bent by the mirror (C). The image is seen laterally inverted (D), because the reflected rays reach opposite sides of the eye. An image can be seen right way round in two plane mirrors at right angles (E). Although an image reflected once appears laterally inverted (1, 2), one reflected twice (3) is seen correctly (F). 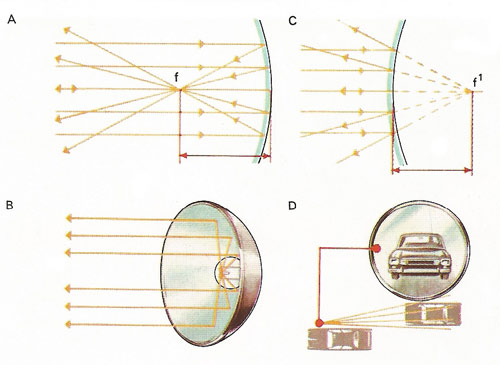 A mirror is a smooth reflecting surface in which sharp images can be formed. Undistorted but laterally (side-to-side) reversed virtual images can be seen in flat (plane) mirrors. (Such images are "virtual" and not "real" because no light actually passes through the apparent position of the image.)

Concave spherical mirrors form real inverted images of objects farther away than half the radius of curvature of the mirror and virtual images of closer objects. Concave paraboloidal mirrors are in reflecting telescopes. Telescope mirrors are coated on their front surface (unlike everyday mirrors which are coated at the back) by aluminizing. Because astronomical images need to be sharp, the surface shape of the mirror must be very precise; typically, it should not alter the reflected wavefront of light by more than one-quarter of a wavelength of light across its entire surface. New techniques, including segmented mirrors and adaptive optics, have enabled the construction of telescopes with mirrors up to 10 m in diameter. Mirrors up to 10 times larger are envisaged over the next decade (see extremely large telescope). Parabolic concave mirrors, which focus a parallel beam of light at a single point, also find use as reflectors for solar furnaces and searchlights.

Convex spherical mirrors always form distorted virtual images but offer a wider field of view than plane mirrors. Half-silvered glass mirrors are used in many optical instruments and can be used to give a one-way mirror effect between a well-lit and a dimly illuminated room.

Ancient mirrors were usually made of polished bronze but glass mirrors backed with tin amalgam became the rule in the 17th century. Silvered-glass mirrors were first manufactured in 1840, five years after Liebig discovered that a silver mirror was formed on a glass surface when an ammoniacal solution of silver nitrate was reduced by an aldehyde.