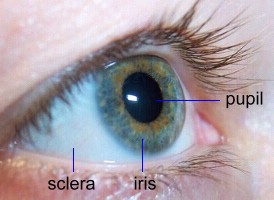 The iris is the colored part of the human and (more generally) the vertebrate eye, and the structure controlling the amount of light that enters the eye. It is a thin sheet of tissue, forming a pigmented diaphragm in front of the lens with a central aperture– the pupil through which light passes to the retina.

The iris is attached all round its outer margin to the ciliary body. It contains a dilator muscle, consisting of muscle fibers that run radially through the iris like spokes on a wheel, which serves to dilate (widen) the pupil. It also contains a ring-shaped sphincter muscle, at its free inner margin, which constricts (narrows) the pupil. Light, stimulating the retina and optic nerve, reflexively controls the size of the pupil, reducing it in strong light and increasing it in dim light.

A structurally and functionally similar iris occurs in the cephalopod eye.

Aniridia is a congenital absence of the iris. This may be a hereditary condition, associated with macular dysplasia, sensory nystagmus, or congenital cataract.

If the iris contains a lot of brown pigment, then it reflects the wavelength of light responsible for brown and the iris appears this color. However, if the front layer of iris cells – the stroma – has little brown pigment, the tiny, loosely-organized stroma cells interact with blue light much more than with red and lower-frequency light. This interaction causes the blue light to scatter out the eye so that the iris appears blue.