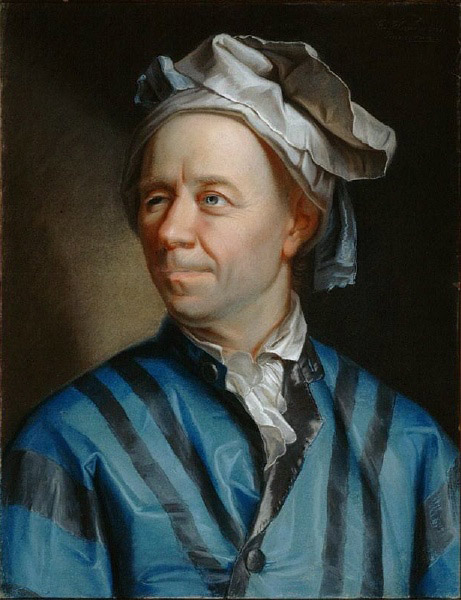 Leonhard Euler was a great Swiss mathematician, the second most prolific mathematician in history (in terms of publications), after Paul Erdös. His greatest contributions were to number theory, but Euler also did important work in calculus, geometry, algebra, probability, acoustics, optics, mechanics, astronomy, artillery, navigation, and finance. He had a knack of coming up with important results by intuition, he cast calculus and trigonometry in their modern forms, and he showed the importance of the number e. Even the amusing puzzles he invented and, in some cases, solved have opened up new mathematical fields. The Bridges of Königsberg problem, for example, heralded the beginning of graph theory and topology, while his Thirty-six Officers Problem stimulated important work in combinatorics. Euler also worked on magic squares and the problem of the knight's tour.

Along with Joseph Lagrange, Pierre Laplace, and others, Euler helped develop the science of celestial mechanics. He applied powerful new mathematical techniques to problems of cometary orbits, planetary perturbations, and the tides. He also refined the theory of the Moon's motion and calculated more accurate orbits for Jupiter and Saturn.

Having learned some math from his father, a Calvinist preacher, Euler studied at the University of Basle where he became close friends with members of the Bernoulli family. In 1727, he moved to St. Petersburg, to the court of Catherine the Great, becoming professor of physics (1730) and of mathematics (1733). A devout Christian, Euler met in Russia the encyclopedist and philosopher René Diderot, a notorious atheist. When Diderot heard that Euler had a mathematical proof of the existence of God, he asked for it and was quoted the equation now often referred to as Euler's identity. Upon losing the use of his right eye, Euler said "Now I will have less distraction." Indeed, the quantity of his output seemed to be inversely proportional to the quality of his sight, because his rate of publication increased after he became almost totally blind in 1766. Euler died moments after calculating the orbit of Uranus on September 18, 1783.

For any real number φ, Euler's formula is

This most extraordinary equation, called Euler's identity, first emerged in Euler's Introductio, published in 1748. It is remarkable because it links the most important mathematical constants, e and π, the imaginary unit i, and the basic numbers used in counting, 0 and 1. In describing the equation to students, the Harvard mathematician Benjamin Peirce said: "Gentlemen, that is surely true, it is absolutely paradoxical; we cannot understand it, and we don't know what it means, but we have proved it, and therefore, we know it must be the truth."

This expression underlines that it should never cease to astonish us, mathematically, that raising a transcendental to the power of another multiplied by something totally imaginary has the same value as a perfectly real number – and a negative one to boot. One might have 'expected' the value to be some other – positive – transcendental?

Physically, this beautiful identity links real-world ratios of key circle metrics with natural logarithms, and with the 'intrinsic exponentiality' of the growth of many physical and biological processes; and ... with the entirely 'imaginary' (dark matter?). Yet it is all grounded in an implicit statement about the eternal, recurring sinusoidality of nature itself, deriving from the identity eix = cos x + i sin x.

But ... the latest thinking in physics is that 'universal constants' (such as the speed of light), may not be 'constant' after all – they may perhaps only be examples of what I recently called datoids.* It is therefore interesting for mathematicians to ask: does this beautiful identity still hold true in a part of the universe where (through gravitational contortions in the space-time continuum) the circle metrics give a value for π which is not 3.14159... – but, say, precisely 4.14 [and similarly for the value of e]?

One would suppose that the answer to that question is "No", since this would lead to the conclusion that i and/or 1 could not, in that strange region, be exactly 'integers'. Such a conclusion would present a profound mathematical / logical / philosophical problem, since the 'intrinsic' phenomenon and process of number, and (ontologically integer) counting, would be threatened – it may not even 'work' at all.

But why should gravitationally-twisted space-time result in the breakdown of integer and counting? Could it be, rather, that intrinsically integers themselves are also mere datoids? If so, what is the more fundamental, integral, truth of which whole numbers are only a highly-useful-on-Earth approximation? Is the 'universal' (and not necessarily constant) unit of counting actually '-eiπ', and not '1'...?

In algebraic topology, the Euler characteristic arises from homology and connects to many other invariants.

An Euler square is a square array made by combining n objects of two types such that the first and second elements form a Latin square. Euler squares are also known as Graeco-Latin squares, Graeco-Roman squares, or Latin-Graeco squares. For many years, Euler squares were known to exist for n = 3, 4, and for every odd n except n = 3k. Euler's Graeco-Roman squares conjecture maintained that there are no Euler squares of order n = 4k + 2 for k = 1, 2, .... However, such squares were found to exist in 1959 by Bose and Shrikande, refuting the conjecture.