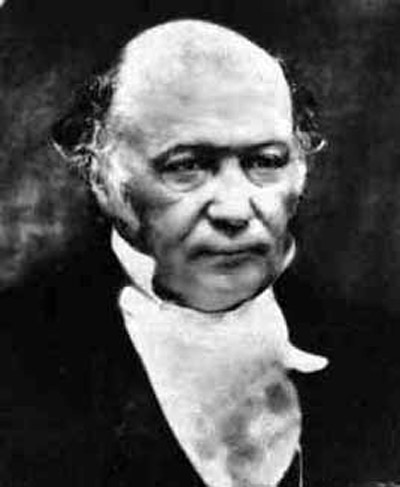 William Hamilton was an Irish mathematician who, among other things, invented quaternions and a new theory of dynamics. Having excelled in Greek and mathematical physics at Trinity College Dublin, Hamilton was appointed Astronomer Royal of Ireland; in this position he served from 1827 to his death and, during all that time, lived in Dunsink Observatory, Dunsink Lane, to the northwest of Dublin. However, he quickly lost interest in staying up at nights to make observations – he hired three of his sisters to help run the place – and preferred instead to write poetry (badly). He was friends with Samuel Coleridge, who introduced him to the philosophy of Kant, which had a great influence on him, and with William Wordsworth, who advised him against writing any more poems.

Hamilton did early work on caustic curves and was led from this to his discovery of the law of least action, which enabled many physical problems to be expressed more elegantly. One of his greatest triumphs was his treatment of complex numbers as pairs of real numbers, an approach that finally exorcised long-standing suspicions about the reality of imaginary numbers, and helped clear the way for other algebras. From this he was led to consider ordered quartets of numbers, which he called quaternions. The idea for quaternions came to Hamilton suddenly on October 16, 1843, while he was standing on Brougham ("Broom") Bridge, where Broombridge Street crosses the Royal Canal, Dublin; a plaque under the bridge, on the towpath, was unveiled by the Taoiseach (head of the Irish parliament), Eamon De Valera, on November 13, 1958. Of his invention, Hamilton wrote:

The quaternion was born, as a curious offspring of a quaternion of parents, say of geometry, algebra, metaphysics, and poetry... I have never been able to give a clearer statement of their nature and their aim than I have done in two lines of a sonnet addressed to Sir John Herschel:

"And how the One of Time, of Space the Three
Might in the Chain of Symbols girdled be."

Hamilton's interest in complex numbers was stimulated by his friend and compatriot John Graves, who pointed Hamilton in the direction of John Warren's A Treatise on the Geometrical Representation of the Square Root of Negative Quantities. This book explained the concept of the complex plane, which Hamilton turned from geometry into algebra. One of Hamilton's last inventions was a curiosity called the icosian calculus, which was another outcome of his friendship with Graves. After a visit to the latter's house, Hamiltonian wrote: "Conceive me shut up and revelling for a fortnight in John Graves' Paradise of Books! of which he has really an astonishingly extensive collection, especially in the curious and mathematical kinds. Such new works from the Continent he has picked up! and such rare old ones too!" Graves posed some puzzles to Hamilton, and either Graves or his books got Hamilton to thinking about regular polyhedra. When Hamilton returned to Dublin he thought about the symmetry group of the icosahedron, and used it to invent an algebra he called the "icosians" and also a game called the Icosian Game. The only complete example of this game, inscribed to Graves, is now in the keeping of the Royal Irish Academy, of which Hamilton was the president from 1837 to 1847. (In early 1996, a second example of the Icosian Game came to light but only included the board.)

In some ways, Hamilton was too far ahead of his time. The operator now referred to as the Hamiltonian and the so-called Hamilton-Jacobi equation that relates waves and particles only became important when quantum mechanics came along, and Felix Klein introduced Erwin Schrödinger, the father of wave mechanics, to Hamilton's work. His theory of quaternions was taken further by William Clifford.

Hamilton's personal life was not always happy. He fell deeply in love with a woman named Catherine Disney, who was forced by her parents to marry a wealthy man 15 years older than her. Hamilton remained hopelessly in love with her the rest of his life, though he eventually married someone else. He became an alcoholic, then foreswore drink, then relapsed. Many years after their early romance, Catherine began a secret correspondence with Hamilton. Her husband became suspicious and she attempted suicide by taking laudanum. Five years later, she became seriously ill. Hamilton visited her and gave her a copy of his Lectures on Quaternions; they kissed at last, and she died two weeks later. He carried her picture with him ever afterward and talked about her to anyone who would listen.

A Hamilton path, named after William Hamilton, is a path that traverses every vertex of a connected graph once and only once. The problem of the knight's tour is equivalent to finding a Hamilton path (or, in the case, of a reentrant tour, i.e. one that starts and ends on the same vertex, a Hamilton circuit) that corresponds to the legal moves of the knight. Compare with Euler path. See also traveling salesman problem.

A Hamiltonian is a mathematical function that can be used systematically and with great generality to generate the equations of motion of a dynamic system. The Hamiltonian is equivalent in many cases to the sum of the kinetic energy and potential energy of a system expressed in terms of the system's coordinates and momenta treated as independent variables.

It is also the mathematical operator that generates such a function.