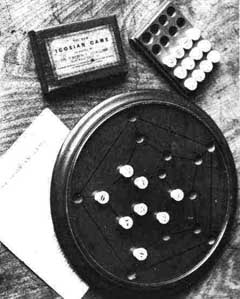 The Icosian Game is a game devised by William Hamilton and first described by him in 1857 at a meeting of the British Association in Dublin. The object of the game is to find a way around the edges of a dodecahedron so that every vertex (corner) is visited once and only once. A path such as this became known as a Hamilton path, though the task of finding a circuit that passes just once through every vertex of a shape seems to have arisen first in connection with Leonhard Euler's study of the knight's tour. Two years before Hamilton introduced his game, Thomas Kirkman posed the problem explicitly in a paper that he submitted to the Royal Society: Given a graph of a polyhedron, does there exist a cycle passing through every vertex?

The Icosian Game stemmed from Hamilton's invention of a curious kind of algebra that he called icosians, based on the symmetry properties of the icosahedron. Hamilton connected the mathematics of his icosians with the problem of traveling along the edges of a dodecahedron, hitting each vertex just once, and coming back to the starting point. His friend and fellow Irishman John Graves (1806–1870) suggested turning the problem into a commercial game and put Hamilton in contact with the London company of John Jacques and Sons, toy-makers and manufacturer of high quality chess sets. Jacques bought the rights to the game for £25 and marketed two versions of it, under the name Around the World. One version, for the parlor, was played on a flat board; another, for the "traveler," consisted of an actual dodecahedron. In both cases, nails at each vertex stood for a major city of the world and the player wrapped a piece of string around these nails as they went. In the event, the game was a complete sales flop, mainly because it was too easy, even for children – but not for Hamilton himself who always used the icosian calculus to figure out his moves, instead of just trying different paths like everyone else!