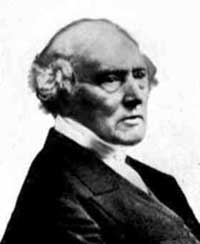 Thomas Kirkman was an English rector and mathematician who did important work in combinatorics. His so-called schoolgirls problem, which he posed in 1850, led to a more general study of certain ways of combining of objects. He also explored the possibility of finding a route around the edges of a given polyhedron that passes through each vertex (corner) of the shape once and only once. His rather complex and ultimately unprovable ideas were later picked up and refined successfully by William Hamilton but not before Kirkman had managed to supply a general proof of the fact that "if a polyhedron has an odd number of vertices and each face has an even number of edges, then there is no circuit which passes through all the vertices." This result introduces the concept of a bipartite graph – a graph that can be divided into two separate sets of vertices such that every edge in one set joins a vertex.