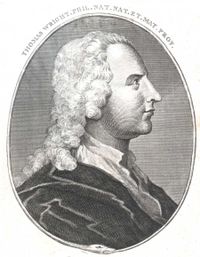 Thomas Wright was an English amateur astronomer, private tutor, and instrument-maker who, in An Original Theory or New Hypothesis of the Universe (1750),1 was the first to propose a reasonably modern view of the Milky Way in which the Sun is not centrally located. He suggested that the Milky Way is a slab of stars shaped like a mill-wheel with the Sun lying between the two planes, though not necessarily at the hub. He further suggested that there might be other collections of stars [external galaxies] like the Milky Way, citing as evidence "the many cloudy spots [nebulae], just perceivable by us ... in which ... no one star or particular constituent can possibly be distinguished ..." His later description of the Universe in terms of systems of spheres and rings of stars was taken up by Immanuel Kant. Wright also speculated about the existence of life on other worlds, but from a theological rather than a scientific standpoint. Despite having relegated the Earth to a mundane site within a giant collection of similar stars, he returned to a form of anthropocentrism with his ideas on the transmigration of souls.

1. Wright, Thomas. An Original Theory or New Hypothesis of the Universe. Reprinted with an introduction by Michael A. Hoskin. New York: American Elsevier (1971) (first published 1750).