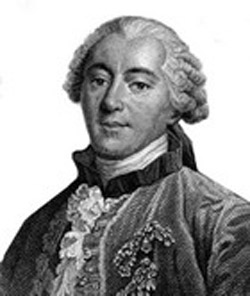 Georges Buffon was a French naturalist who was the first modern taxonomist of the animal kingdom and who led the team which produced the 44-volume Histoire naturelle (1749–1804).

The opening volume of this work contains Buffon's cometary collision hypothesis of the origin of the Sun's planetary system. In the 1775 Supplément, he argues that terrestrial-type life occurs on every world where the temperature is the same as on present-day Earth. This leads him to compute the times and durations for which the various planets and moons of the solar system have been, are, or will be habitable, based on the assumption that most of their heat is internal rather than derived from the Sun. Mars according to his calculations is already dead, Earth has 93,291 life-sustaining years left, while Jupiter has not yet cooled to the point at which life can begin.

He is also responsible for investigating the mathematical problem known as Buffon's needle.