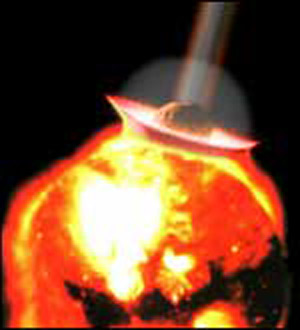 The cometary collision hypothesis, proposed in 1749 by Georges Louis Leclerc, Comte de Buffon, was the idea that a comet struck the Sun and broke off fragments which formed the planets. This was the first version of the cataclysmic hypothesis of the origin of the solar system. Buffon mistakenly assumed that comets can be approximately as large as stars. The impact, he assumed, was off-center so that not only were the planets thrown out into their orbits but they (together with the Sun) were set spinning on their axes, some so rapidly that they threw off additional material from which their moons were made. A decade later, Kant put forward the earliest form of the rival nebular hypothesis.