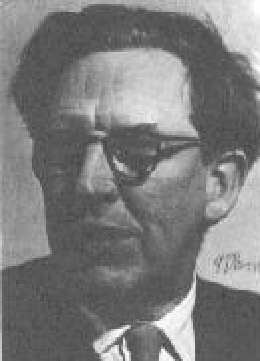 J. D. Bernal was an Irish physicist, specializing in X-ray crystallography, who also carried out important research into the chemical origin of life and speculated on what general principles might apply to all forms of life in the Universe.1 He also inquired into the future of mankind and the colonization of space.

Bernal graduated from Emmanuel College, Cambridge, and began his research career in crystallography under William Bragg at the Davy-Faraday Laboratory, in London, before returning to Cambridge. In 1937, he was appointed to the chair of Physics at Birkbeck College, London, where his studies in crystallography led him to examine increasingly complex biological materials and, eventually, the processes leading to the origin of life. In a 1947 lecture, "The Physical Basis of Life," he suggested that clays may have played a role in concentrating organic molecules and pondered on the nature of life in a cosmic context:

[T]errestrial limitations obviously beg the question of whether there is any more generalized activity that we can call life... Whether there are some general characteristics which would apply not only to life on this planet with its very special set of physical conditions, but to life of any kind, is an interesting, but so far purely theoretical question.

In a 1952 lecture to the British Interplanetary Society (chaired at the time by Arthur C. Clarke) he further helped bring the possibility of extraterrestrial life into the province of mainstream biology by arguing that "the biology of the future would not be confined to our own planet, but would take on the character of cosmobiology."

Following the discovery of organic substances in the Orgeuil meteorite, Bernal suggested2 the material may have been due to contamination on Earth; otherwise, it must have formed inorganically in space or as the result of living things on the parent body from which the meteorite came. An inorganic origin, as a result of processes in the early solar system, said Bernal, could mean that meteorites provided the raw materials for the first synthesis of life on Earth (see cosmic collisions, biological effects). As long ago as 1929, in his remarkably perceptive book The World, the Flesh and the Devil,3 Bernal discussed the possibility of colonies in space (see Bernal Sphere).