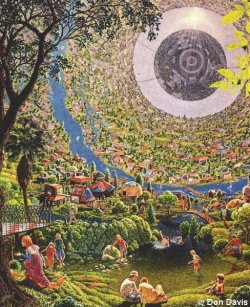 A Bernal sphere is a spherical space colony of the type first described in the 1920s by J. D. Bernal.1 As the material and energy needs of the human race grew, Bernal surmised, it would be natural that someday orbiting colonies would be built to harness the Sun's energy and provide extra living space for a burgeoning population. He conceived of self-sufficient globes, 16 km (10 mi) in diameter, that would each be home to between 20,000 and 30,000 inhabitants.

Almost half a century later, Gerard K. O'Neill based the scheme for his "Island One" space colony on a smaller Bernal sphere, some 500 m in diameter. Rotating twice a minute this would generate an Earth-normal artificial gravity at its equator. An advantage of the sphere is that it has the smallest surface area for a given internal volume, so minimizing the amount of radiation shielding required.

1. Bernal, J. D. The World, the Flesh, and the Devil: An Enquiry into the Future of the Three Enemies of the Rational Soul, 2nd ed. Bloomington: University of Indiana Press (1969) (first published in 1929).