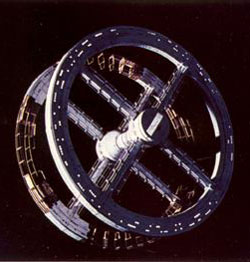 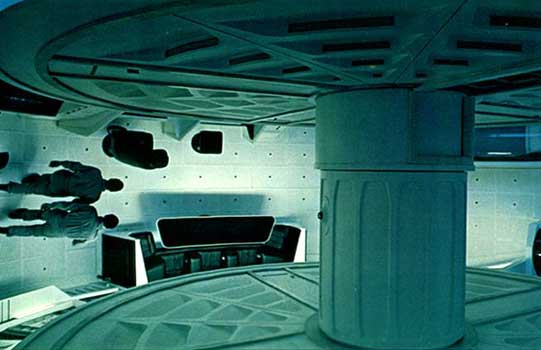 The gravity ferris in the Jupiter spacecraft in 2001.

Artificial gravity is the simulation of the pull of gravity aboard a space station, space colony, or manned spacecraft by the steady rotation, at an appropriate angular speed, of all or part of the vessel. Such a technique may be essential for long-duration missions to avoid adverse physiological (and possibly psychological) reactions to weightlessness.

The idea of a rotating wheel-like space station goes back as far as 1928 in the writings of Herman Noordung and was developed further by Wernher von Braun. Its most famous fictional representation is in the film 2001: A Space Odyssey, which also depicts spin-generated artificial gravity aboard a spaceship bound for Jupiter. The O'Neill-type space colony provides another classic illustration of this technique. However, there are several reasons why large-scale rotation is unlikely to be used to simulate gravity in the near future. In the case of a manned Mars spacecraft, for example, the structure required would be prohibitively big, massive, and energy-costly to run. A better approach for such a mission, and one being explored, is to provide astronauts with a small spinning bed on which they can lie, head at the center and feet pointing out, for an hour or so each day, so that their bodies can be loaded in approximately the same way they would be under normal Earth-gravity.

In the case of space stations, one of the objects is to carry out experiments in zero-g, or, more precisely, microgravity. In a rotating structure, the only gravity-free place is along the axis of rotation. At right-angles to this axis, the pull of simulated gravity varies as the square of the tangential speed. Another way to achieve Earth-normal gravity is not by constant rotation, which produces the required force through angular acceleration, but by steadily increasing straight-line speed at just the right rate. This is the method used in the hypothetical one-g spacecraft.1