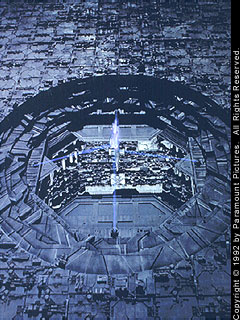 The Dyson sphere in the Star Trek TNG episode "Relics".

A hypothetical Dyson sphere around the Sun.

A Dyson sphere is an immense artificial structure proposed by Freeman Dyson in 1959[1,2] for the purpose of intercepting vast amounts of solar energy. Dyson calculated that, if mankind's current Malthusian (exponential) growth rate in energy consumption were to continue, the human race would reach a crisis point within the next two to three millennia (see Malthus, Thomas Robert). At this point, all the non-renewable sources, such as fossil and nuclear fuels, would be exhausted, and even renewable sources exploited on a planet-wide scale would be unable to cope with further demand. The problem is that the Earth intercepts less than one billionth of the total radiant output of the Sun. To provide for future growth, the human race will need to capture much more of the Sun's light. It could do this with a Dyson sphere: a spherical shell, 2 to 3 m thick, centered on the Sun and rotating around it at about twice the orbital distance of the Earth (see Note 1 below). The material for building the sphere, Dyson suggested, could come from disassembling the planet Jupiter and utilizing the minerals and metals from its deep interior. Dyson acknowledged that the inspiration for his scheme came from Olaf Stapledon's Star Maker:

As the eons advanced, hundreds of thousands of worlds were constructed, all of this type, but gradually increasing in size and complexity. Many a star without natural planets came to be surrounded by concentric rings of artificial worlds. In some cases the inner rings contained scores, the outer rings thousands of globes adapted to life at some particular distance from the Sun.

Stapledon, in turn, may have borrowed the idea from J. D. Bernal, who also influenced Dyson directly.

Following the publication of Dyson's proposal, several letters appeared in Science pointing out that a solid circumstellar sphere would be subject to intolerably high stresses. Dyson replied that what he actually envisaged was a loose collection of over 100,000 objects traveling on independent orbits in a shell about 1 million kilometers thick. Dyson's intended (fragmented) arrangement may be referred to as a Type I Dyson sphere and a solid shell as a Type II. It is the latter, in fact, which subsequently received most publicity through a number of science fiction stories woven around the theme, including Robert Silverberg's Across a Billion Years (1969), Bob Shaw's Orbitsville (1975), and Frederick Pohl and Jack Williamson's Wall Around a Star (1983). A Type II Dyson sphere also features in the Star Trek: New Generation episode "Relics". In order to produce the artificial gravity to allow such a structure to be habitable on its inner surface, the sphere would have to rotate. But the required rate of rotation (see Note 2) would set up such extreme stresses in the shell (tending to deform it into an oblate spheroid) that no known material would be able to withstand them. Even if the structural integrity of the shell were not compromised, only the equatorial regions would be suitable for permanent habitation, for two reasons: the air of the inner biosphere would tend to collect at the equator, and it would only be here that the maximum level of artificial gravity would be achieved. The "pull" would decrease as the distance from the equator increased, until it became zero at the poles. Additionally, a Type II sphere would be unstable since even the slightest collision, say with an asteroid or comet, would cause the structure to drift and eventually collide with the Sun.

A Type I Dyson sphere, on the other hand, appears to be such an inevitable and achievable piece of astroengineering that we might expect not only the human race eventually to build one but for other civilizations, more advanced than our own, already to have theirs in place. Dyson pointed this out and suggested how such structures would appear over interstellar distances. A Dyson sphere would absorb most of the visible and shorter wavelength radiation from its host star and re-emit a portion of it in the form of infrared radiation.[3] Its infrared output, in fact, would be similar to that of a protostar. The artificial nature of the object might be revealed in other ways. Said Dyson: "One would look in particular for irregular light variations due to starlight shining through chinks in the curtain, and for stray electromagnetic fields and radio noise produced by large-scale electrical operations ..." Several searches have been carried out.[4, 5, 6, 7, 8]

A third type of Dyson sphere – a Dyson "bubble" – has been proposed in which the shell would be complete, very thin, and non-rotating. It would consist of statites, or stationary solar sails, which reflected light onto collectors for use in external habitats. The entire mass of the structure would be approximately that of the Moon or a large asteroid.

2. To produce Earth-normal gravity at the equator of a Dyson sphere, the sphere would have to rotate so that its angular acceleration matched the acceleration due to gravity at Earth's surface (approximately 9.8 m/s2). Angular acceleration is given by v2/r, where v is the tangential velocity and r the distance to the center of rotation. Therefore, we require