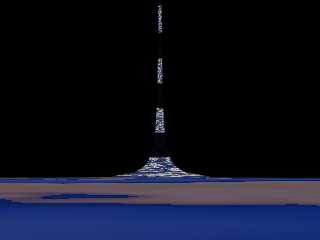 Ringworld is a novel by Larry Niven1 (1970), the centerpiece of which is a colossal piece of astroengineering, 1 million miles wide and 600 million miles in circumference, circling around a remote star. A ringworld is a compromise between a normal planet and a Dyson sphere. A ringworld would be an artificial, band-shaped structure placed around a star within the star's habitable zone. Although, unlike a Dyson sphere, it would intercept only a small fraction of the total radiation output of the star, the incident energy would still be many millions of times greater than that falling on a planet. The ringworld would be easier to build than a Dyson sphere, allow freer access to open space, and be completely habitable (in contrast with most of the interior surface of a Dyson sphere, which would be subject to reduced gravity conditions.) As a bonus, those living on a ringworld would be able to see the stars.

Niven continued his narrative and speculations about such a structure in The Ringworld Engineers.