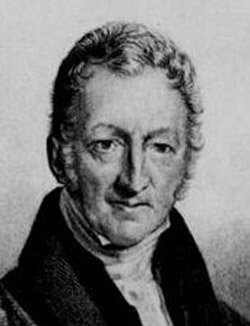 Thomas Malthus was an English economist and demographer who, in 1798, published anonymously his Essay on the Principle of Population, which argued that population has a natural tendency to rise faster than the means of its subsistence. The idea of over-reproduction and competition for resources was very important to Darwin's evolutionary scheme.

Malthus was born at the Rookery, near Dorking, in Surrey, where his father owned a small estate. He was ninth wrangler at Cambridge in 1788, was elected Fellow of his college (Jesus), took holy orders, and was appointed to a parish in his native county. In 1798 he brought out his Essay on the Principle of Population, which attracted much attention and criticism. During the following years, Malthus extended his knowledge of the subject both by travel and by reading, and in 1803 published a much enlarged edition of his essay. In 1804 he married, and next year was appointed professor of political economy and modern history in the East India Company's college at Haileybury, a post which he occupied till his death at Bath in 1834.


Content of the Essay and its relation to Darwinism

The aim of his Essay was to supply a reasoned corrective to the theories regarding the perfectibility of society, which had been diffused by Rousseau and his school, and which had been advocated in England by Godwin. Malthus maintained that such optimistic hopes are rendered baseless by the natural tendency of population to increase faster than the means of subsistence. He pointed out that in both the animal and plant kingdoms life was so prolific that if allowed free room to multiply it would fill millions of worlds in the course of a few thousand years. The only limit to its increase is the want of room and food. With regard to mankind, the question is complicated by the fact that the instinct of propagation is controlled by reason; but if in the case of humans the ultimate check to population is the want of food, only it seldom operates directly, but takes a variety of forms in accordance with the complexity of human society.

It can't be said that Malthus was original in his exposition of population growth. Both Plato and Aristotle addressed the theme. Shortly before the time of Malthus, the problem had been handled by Benjamin Franklin and David Hume, and others. Malthus crystallized the views of those writers, and presented them in systematic form with elaborate proofs derived from history.

The connection between Malthus and Darwin is particularly interesting. Darwin saw "on reading Malthus On Population that natural selection was the inevitable result of the rapid increase of all organic beings," for such rapid increase necessarily leads to the struggle for existence. Besides his Essay on the Principle of Population, Malthus wrote two important works, An Inquiry into the Nature and Progress of Rent and Principle of Political Economy.