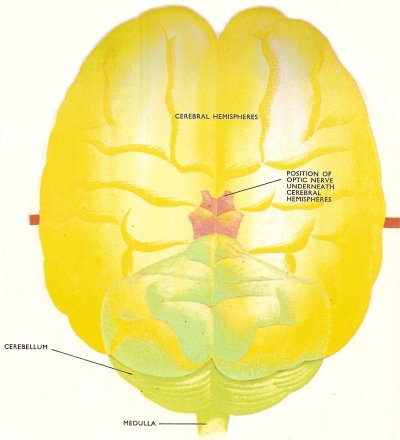 In vertebrates, as in mollusc's and arthropods, nervous tissue is concentrated at the anterior (front) end of the body, forming the brain. The vertebrate nervous system is characterized by this well-marked centralization and by the presence of large amounts of nerve tissue, by the actions of which the typical vertebrate behavior patterns are controlled.

While some parts of the brain are concerned with receiving signals from receptor organs, such as eyes and ears, and with sending signals to effector organs (muscles or glands), other parts are not directly concerned with receiving or sending signals and are not linked with any particular region of the body. These areas of the brain can overrule the rest of the nervous system and so regulate the actions of the animal. In other words, these regions are responsible for the intelligence of the animal, for its awareness of its surroundings, and for the powers of learning. These association centers are more highly developed in mammals and birds than in other animals, and especially so in humans, apes, and cetaceans.

The central nervous system, consisting of the brain and spinal cord, is hollow and situated above (dorsal to) the gut. This contrasts with the solid ventral nerve cord of the invertebrates. The vertebrate nerve cord and brain contain a liquid – cerebrospinal fluid – which itself contains mineral salts and traces of protein and sugar. The fluid helps to support the nervous tissue and probably plays some part in its nutrition.

The basic vertebrate pattern is shown by the lampreys and hagfishes which are the most primitive living vertebrates. The nerve fibers in these animals, however, are not covered by the myelin sheath (a fatty insulating layer) found in all higher vertebrates. This means that nervous conduction is slow and the complex nervous connections found in higher forms are impossible in these early vertebrates.

The front part of the brain is concerned with smell – the olfactory sense. Nerves from the olfactory organ run into the thickened walls of the brain which are enlarged to form the olfactory lobes of the cerebrum. Smell appears to be the only function of this region in lampreys. Behind the hemispheres is the thalamus, which completes the forebrain. The thalamus receives a few sensory nerves and carries the pituitary gland on its under surface. The pineal eye arises on the dorsal side and reaches to the surface of the head. It is sensitive to light in the lamprey but much reduced in higher vertebrates.

The midbrain, behind the thalamus, deals with the sense of sight. Its walls are expanded to form the optic lobes. Nerves pass from the midbrain region to the minor nerves of the spinal cord and it is through these that the animal is able to act upon the signals it receives from the eyes. This system can therefore be termed an elementary association center or center of intelligence.

The hindbrain consists of the cerebellum and the medulla oblongata. The former is concerned with the regulation of balance and movement and is not well developed in lampreys which spend much of their time attached to rocks or to fish by means of a large sucker (oral sucker) round the mouth. The medulla oblongata passes directly into the spinal cord. It is concerned with the senses of taste and hearing and also with control of the pumping movement of the gills. The pressure sensing system of the lateral line also has its center in the medulla. The large size of the medulla in lampreys is due to the importance of the oral sucker. They are connected by a large nerve. Taste and hearing are not well developed. The roof of the brain is well supplied with blood vessels (the choroid plexus.

The spinal cord is uniformly gray in color with the nerve cell bodies lying close to the central canal. Connections with other cells are made around the outside of this gray matter in what corresponds to the white matter of higher vertebrates. The roots of the spinal nerves do not join just outside the spinal cord as they do in other vertebrates. These spinal nerves extend as the peripheral nervous system (the network of nerves spreading throughout the body). The peripheral system acts in much the same way as that of the invertebrates, sending and receiving impulses to and from the central nervous system.

As the nervous systems of other vertebrates are examined it will be seen that the relative sizes of the main centers vary according to the habits of the animal and the senses on which it relies most. The association center, which was seen beginning in the midbrain of the lamprey, develops further in the higher vertebrates until in humans are found the complex patterns of learning of learning, reasoning, and memory.

The cerebral hemispheres of fish are still concerned almost entirely with the sense of smell. The floor of this region is developed but the roof remains thin and has no nerves. The floor receives nerves from the olfactory organs and in the sharks, which rely on smell for hunting their food, the cerebral hemispheres are large. In the salmon (and most other bony fish), which relies on sight for getting its food, the cerebral hemispheres are dwarfed by the large optic lobes. The midbrain receives nerves from organs and regions other than the eyes and is able to combine the signals received and act accordingly. There is therefore a more highly organized association center here. Fish are, on the whole, active animals and the cerebellum is enlarged in order that it can efficiently control the movement and balance of the animal. The medulla is not generally a significant region but, in fish like the carp which find food by taste, the gustatory (taste) region is enlarged to very nearly the size of the optic lobes.

The amphibian brain does not widely differ from the typical fish brain except that the cerebral hemispheres are roofed over with nervous tissue. The sense of smell is still the main function of this region although a number of nerves from other sensory systems (e.g. sight) enter the hind part of the hemispheres. There are also some connections between the hemispheres and the motor system of the the spinal cord, thus it can be seen that the forebrain is growing in importance. The midbrain, however, is still the most important region in the amphibians. Apart from the sense of sight, it deals with nerve signals from most other regions of the body and sends signals to other parts of the brain and the spinal cord. The behavior of an amphibian is thus dominated by the centers of the midbrain.

Modern reptiles show a great development in the basal parts of the forebrain. There are large numbers of nervous connections between the thalamus and the hemispheres. The latter are larger than the optic lobes, showing the increased importance of the former. The walls of the thalamus are very thick and many of the optic nerve paths end there as well as many in the midbrain.

The brain in birds is similar to that of reptiles except that the olfactory part of the forebrain is very small; smell is unimportant in birds. The cerebral hemispheres are relatively larger and the whole brain is rather bunched up from front to back but the general pattern is clear. The midbrain and optic lobes are still well developed and have many connections with the cerebral hemispheres and the motor systems since sight plays a very important part in the life of birds. As is to be expected, the cerebellum is highly developed to control the balance and position of the bird in flight. Much of this development has undoubtedly been made by the constant high temperature maintained by birds. The same can be said for mammals.

The mammalian brain is completely dominated by the cerebral hemispheres. The roof has developed enormously and spread out forming the cortex of the cerebrum, which in humans is thrown into a number of elaborate folds and almost covers the rest of the brain. The cortex is made up millions of cells. The more folded the surface, the more cells it can contain. These cells make up the gray matter. Their axons, which make up the tracts or pathways in the brain, form the white matter underneath the cortex. The white matter of the spinal cord is also made up of nerve axons, surrounding the central gray matter.

Many of the nervous functions in the mammal are taken over by the cerebral cortex. The cerebellum remains large and active, however, and the thalamus is enlarged for that is where the nerves of the sensory and motor systems link up and pass to and fro from the cortex where the messages are sorted out, stored, and acted upon when necessary. The behavior, both learned and instinctive of mammals, is controlled by the cortex. Each region of the latter controls certain aspects of behavior such as sight, memory, speech in humans, etc. Removal of, or damage to, any part of the cortex may produce definite changes in character or behavior.