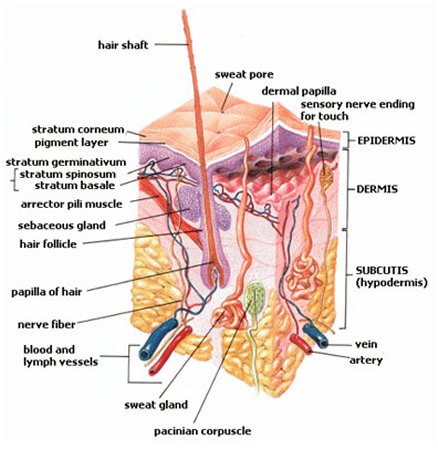 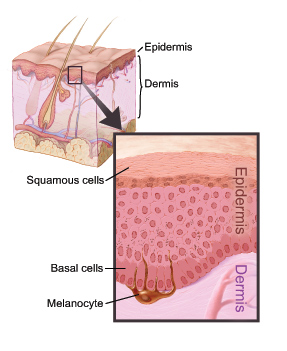 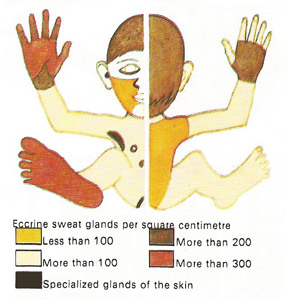 The skin is a vital organ that covers the entire outside of the body of a vertebrate. It forms a protective barrier against pathogens and injuries from the environment. The skin is the body's largest organ. In humans, it is about 2 mm thick and weighs approximately 6 lb. It shields the body against heat, light, injury, and infection. The skin also helps regulate body temperature, gathers sensory information from the environment, stores water, fat, and vitamin D, and plays a role in the immune system protecting us from disease.

The color, thickness and texture of skin vary over the body. There are two general types of skin; thin and hairy, which is more prevalent on the body, and thick and hairless, which is found on parts of the body that are used heavily and endure a large amount of friction, like the palms of the hands or the soles of the feet.

The skin of vertebrates may bear a variety of specialized structures, including hair, scales, and feathers. The skin and its associated structures form an organ system called the integumentary system.

Basically, the skin is comprised of two layers that cover a third fatty layer. These three layers differ in function, thickness, and strength. The outer layer is called the epidermis; it is a tough protective layer that contains the melanin-producing melanocytes. The second layer (located under the epidermis) is called the dermis; it contains nerve endings, sweat glands, oil glands, and hair follicles. Under these two skin layers is a fatty layer of subcutaneous tissue, known as the subcutis or hypodermis. Fig 1 and 2.

The dermis lies beneath the epidermis. It contains blood vessels, lymphatic vessels, and glands. Some of these glands make sweat, which helps cool the body. Other glands make sebum. Sebum is an oily substance that helps keep the skin from drying out. Sweat and sebum reach the surface of the skin through tiny openings called pores.


Specialized cells and structures of the skin

Basket cells surround the base of hair follicles and can sense pressure.

Blood vessels carry nutrients and oxygen-rich blood to the cells that make up the layers of skin and carry away waste products.

The arrector pili muscle is a tiny muscle connected to each hair follicle and the skin. When it contracts it causes the hair to stand erect, and a "goose bump" forms on the skin.

The hair follicle is a tube-shaped sheath that surrounds the part of the hair that is under the skin and nourishes the hair. It is located in the epidermis and the dermis.

The hair shaft is the part of the hair that is above the skin.

Langerhans cells attach themselves to antigens that invade damaged skin and alert the immune system to their presence.

A melanocyte is a cell that produces melanin, and is located in the basal layer of the epidermis.

Merkel cells are tactile cells of neuroectodermal origin located in the basal layer of the epidermis.

A pacinian corpuscle is a nerve receptor located in the subcutaneous fatty tissue that responds to pressure and vibration.

Sebaceous glands are small, sack-shaped glands which release an oily substance onto the hair follicle that coats and protects the hair shaft from becoming brittle. These glands are located in the dermis. Fig 3.

The epidermis is innervated with sensory nerves. These nerves sense and transmit heat, pain, and other noxious sensations. When they are not functioning properly sensations such as numbness, pins-and-needles, pain, tingling, or burning may be felt.

The stratum corneum is outermost layer of the epidermis, and is comprised of dead skin cells. It protects the living cells beneath it by providing a tough barrier between the environment and the lower layers of the skin.

Sweat glands (sudoriferous glands) are located in the epidermis and produce moisture (sweat) that is secreted through tiny ducts onto the surface of the skin (stratum corneum). When sweat evaporates, skin temperature is lowered.


Functions of the skin

Skin has an important role in protecting the body from mechanical injury, water loss, and the entry of harmful agents, such as disease-causing bacteria. It is also a sense organ, containing receptors sensitive to pain, temperature, and pressure. In warm-blooded animals it helps regulate body temperature by means of hair, fur, or feathers, and sweat glands.