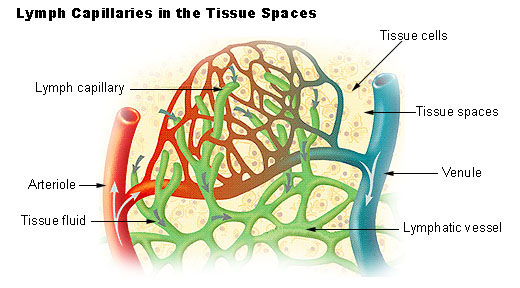 A lymph vessel is a vessel that, unlike a blood vessel, carries fluid only away from tissues. This fluid is a pale, watery substance known as lymph.

The smallest lymph vessels are the lymph capillaries, which begin in the tissue spaces as blind-ended sacs. Lymph capillaries are found in all regions of the body except the bone marrow, central nervous system, and tissues, such as the epidermis, that lack blood vessels. They are especially numerous in the loose connective tissues under the epithelium of the skin and mucous membranes.

The microscopic lymph capillaries merge to form vessels that are typically about as thick as a cotton thread. These small lymph vessels unite to form larger tributaries, called lymph trunks, which drain large regions. Lymph trunks merge until the lymph enters two main channels called lymph ducts which empty into the blood vascular system by draining into the large veins at the base of the neck. The right lymphatic duct, which carries lymph from the upper right quadrant of the body, drains into the right subclavian vein. The larger thoracic duct, which conveys lymph from the rest of the body, begins in a small receptacle in the abdomen, called the cistern of Pecquet. All chyle-collecting vessels, which bring chyle from the small intestine, enter this receptacle as well. Lymph and chyle mix in the thoracic duct and flow into the left subclavian vein, just before it reaches the heart.

Lymph capillaries are essentially tubes of endothelium, which, unlike a typical blood capillary, lack a basal lamina. The lack of a basal lamina allows lymph capillaries to be more permeable than blood capillaries and, as a consequence, more effective in removing protein-rich fluid from the intercellular spaces. Lymph vessels also serve as a preferential conveyance for lipids absorbed from the small intestine. Before lymph is returned to the blood, it passes through lymph nodes where it is exposed to the cells of the immune system. Thus, lymph vessels serve not only as an adjunct to the blood vascular system, but are also an integral part of the immune system.

Like veins, lymphatic tributaries have valves to prevent backflow of fluid. There is no pump in the lymphatic system like the heart in the cardiovascular system. The pressure gradients to move lymph through the vessels come from the skeletal muscle action, respiratory movement, and contraction of smooth muscle in vessel walls.