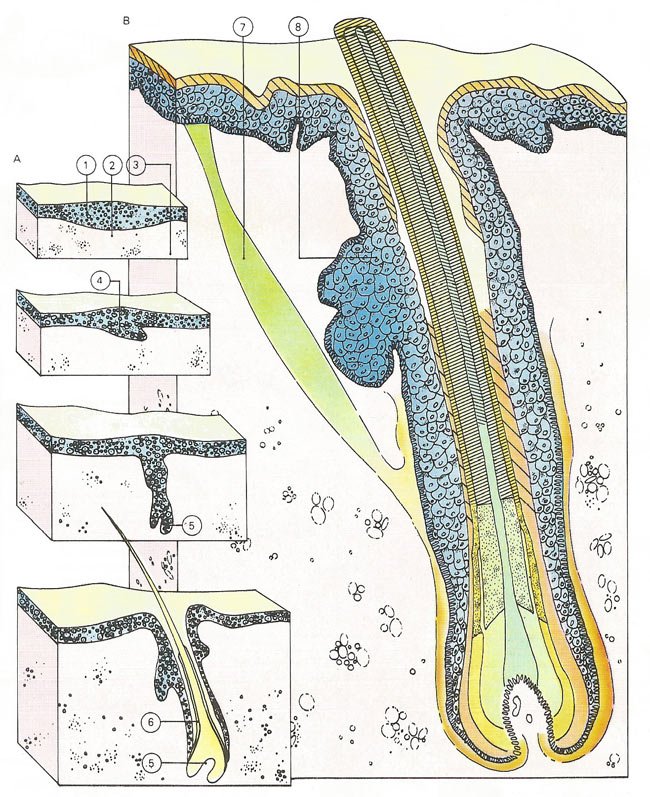 The development of hair (A), which begins in the third month of fetal life, is prefaced by the down-growth of thickened cells of the epidermis (1) into the underlying dermis (2) and connective tissue (3). The hair (4) is the result of a multiplication of cells that clump together to produce a papilla (5) at the base of the follicle. Constantly dividing, these cells push upwards towards the surface, becoming impregnated with the protein keratin, to form the hair shaft (6). Hair grows because of the continued division of these "matrix" cells. A cross-sectional view (B) of the hair shaft shows how each hair is equipped with its own erector muscle (7), endowing independent movement. An associated sebaceous gland (8) secretes oily sebum to lubricate the hair and the surrounding skin. The scalp alone is covered with up to 2 million hairs growing about 0.3 mm a day. 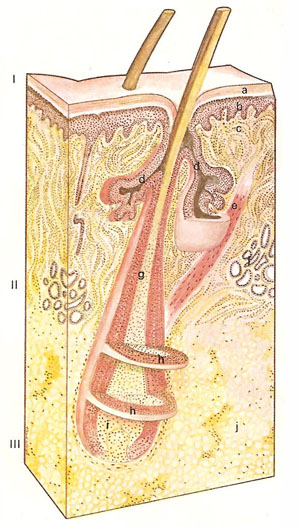 Hair is a multicellular, filamentous structure, consisting of dead keratinized cells, which projects from the epidermis of mammalian skin. It consists primarily of the protein keratin. The section of a hair below the skin surface (the root) is contained within a hair follicle, the base of which lies within the dermis and produces the hair cells. Hair plays a role in maintaining body temperature by reducing heat loss from the skin.

Facial and genetic factors determine both coloring and shape (by heat-labile sulfur bridges). In man all skin surfaces except the palms and soles are covered with very fine hair. This assists in touch reception. In the cold, these hairs are erected to create extra insulation.

Scalp hair is prominent in man. Pubic and axillary hair develop at puberty in response to sex hormones and their patterns differ in the sexes; facial hair is androgen-dependent. Hormone abnormalities alter hair distribution, while baldness follows hair loss.

In botany, hair is a single-celled or many-celled outgrowth from an epidermal cell of a plant.

Several kinds of hair occur on the human body. The appearance depends on age and body location. The so-called lanugo is hair that develops on an unborn child. Usually, it is shed before birth, or within the first few months after birth. The lanugo is immediately replaced by secondary hair which is fine and soft and is often called "baby hair." The coarser hair of later life is called tertiary hair. Hairs are continually lost from all parts of the body through life, and up to a certain age, those which replace them often are coarser tan their predecessors.

The scalp of the average person has about 125,000 hairs. Darker people have fewer scalp hairs than blonds. Scalp hair usually grows from 3 to 5 in per year and, if not cut, can becomes as long as 2 to 3 ft or more.

The hairs of the body originate from hair follicles embedded in the skin. The lower part of the follicle extends into the dermis where it is supplied with blood vessels. Generally, only one hair grows from a single follicle. That part of the hair below the surface of the skin is called the root, while that extending out from the surface of the skin is called the shaft. The sebaceous glands of the skin have their openings in the hair follicles. These glands secrete a substance (sebum) which is responsible for the oily appearance of the skin or scalp. People with oily skin have overactive sebaceous glands. When the hair follicle becomes plugged, the sebum collects within it, turns dark at the surface, and becomes a "black head."

Minute muscles (erectors pilorum) are connected to the hair follicle. When these muscles contract, they temporarily displace the entire follicle, causing the hair to "stand on end." The skin surrounding the hair is also elevated by the contractions of these muscles, giving the skin a prickled appearance, sometimes called "goose pimples." Contraction of the muscles also exerts pressure on the sebaceous glands, causing the emission of extra amounts of sebum. Thus, this set of reactions aids in protecting the body from sudden cold, he hairs forming better insulation when standing erect, and the sebum coats the skin with a further barrier against the cold.

Some skin diseases affect the condition (and existence) of the hair. See also alopecia.