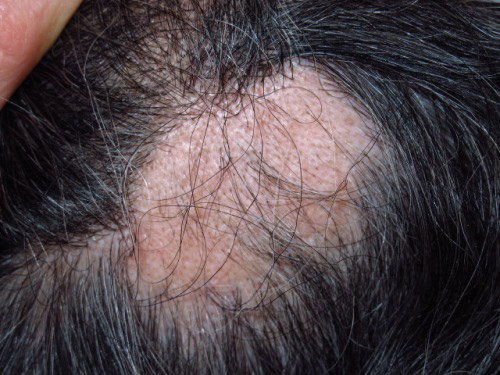 Alopecia is the loss of hair, usually from the scalp, due to disease of hair follicles. Male-pattern baldness is an inherited tendency, often starting in the twenties. Alopecia areata is a disease of unknown cause producing patchy baldness, though it may be total. Prolonged fever, lupus, erythematosus, and ringworm may lead to temporary baldness, as may certain drugs and poisons.

Male-pattern baldness is the most common type of hair loss. This type of baldness usually begins in a males 20's or 30's and will affect about 50% of men by the age of 50.

Male-pattern baldness is hereditary. It begins as a receding hairline, followed by the thinning of hair from the temples and crown. Female-patterned baldness is less common and tends to only thin the hair on the top of the head.

Alopecia areata can cause hair loss anywhere on the body but is more common on the scalp. This type of alopecia is more common in teenagers and young people but can occur at any age. One in five people with this condition have a family history of alopecia areata. Often alopecia areata grows back in a few months. This will be sparse and light in color at first but thicken and darken over time. Some other more severe forms of alopecia are alopecia totalis which, as the name suggests, results in no scalp hair, and alopecia universalis, in which there is no scalp or body hair.

Treatments for alopecia areata include steroid injections (although a steroid gel, or cream is sometimes used) and immunotherapy, which causes an intentional allergic reaction on the affected areas to stimulate hair growth.


Other types of alopecia

anagen effluvium. This type of hair loss affects the whole body. It is often caused by cancer treatment methods. Usually, the hair grows back several months after treatment is stopped.

telogen effluvium. This alopecia is thinning of the entire head of hair rather than bald patches. Often the falling out of hair ceases and new growth begins within six months.