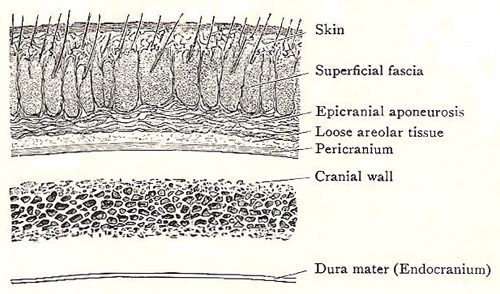 Fig 1. Section through the scalp and cranial wall. 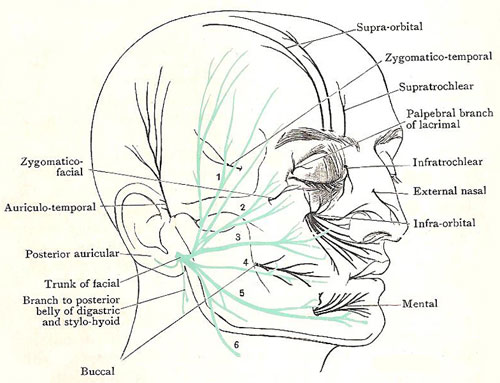 Fig 2. Nerves of the face and scalp. The facial nerve (motor) is depicted in green, the branches of the trigeminal (sensory) in black. 1. Temporal branches. 2 and 3. Zygomatic branches. 4 Buccal branch. 5. Mandibular branch. 6. Cervical branch. 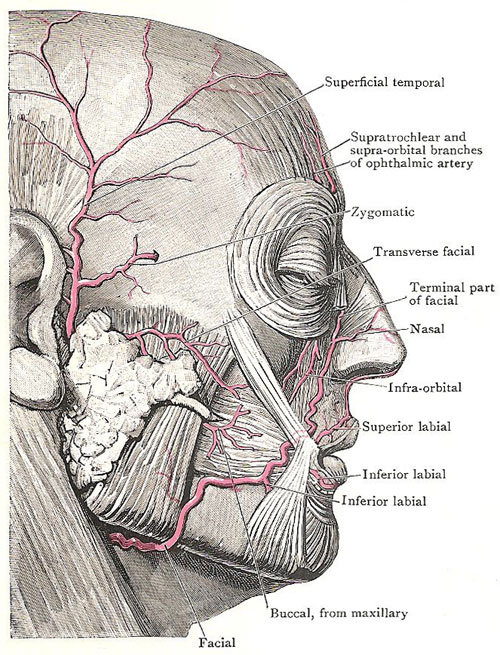 Fig 3. Arteries of the face and scalp.

The scalp consists of the collection of soft structures that cover the skull from one temporal line to the other and from the eyebrows to the superior nuchal lines. The constituent parts of the scalp are arranged in five layers:

The scalp is richly supplied with blood vessels and nerves. They all enter from the periphery, passing into the superficial fascia after piercing the deep fascia of the adjacent regions. As a consequence of that arrangement, large flaps of the scalp may be torn from the center toward the margin, but, as long as they remain attached at the periphery, their sources of nourishment are not seriously interfered with, and, if they are cleaned and replaced, healing occurs rapidly and satisfactorily.


Layers of the scalp

The skin of the scalp is fairly thin and is pierced by hair follicles which extend into the superficial fascia.

The superficial fascia is fibrous, dense, and tough and is adherent to the skin. The vessels and nerves ramify in the fascia before they enter the skin.

The layer of loose areolar tissue has few blood vessels; and it is looser in the central area than towards the edges. It disappears at the supraorbital margins, at the temporal lines and at the superior nuchal lines; effusions of blood or inflammatory exudations in the areolar tissue therefore easily raise the greater part of the scalp from the bone, but do not pass readily into either the face, the temple, or the back of the neck (Fig 1).


Nerves of the scalp and superficial temporal region

Branches of ten pairs of nerves are found in the superficial fascia of the area. Five of them are mainly in front of the auricle (the external part of the ear) and five behind it; and, of each group, one is motor and four are sensory. They communicate with one another so freely that every part of the skin is supplied by more than one nerve (Fig 2).

The motor nerve in front of the auricle is the temporal branch or branches of the facial nerve. The four sensory nerves are all derived from the trigeminal nerve; they are the supratrochlear, the supraorbital, the zygomaticotemporal, and the auriculotemporal.

The motor nerve behind the auricle also is a branch of the facial – the posterior auricular. The four sensory nerves are the great auricular, the lesser occipital, the greater occipital, and the third occipital.

These nerves, together with those of the face, are all derived from four nerves – the motor branches come from the facial; the sensory from the trigeminal and the second and third cervical.

Branches of three nerves are found in the face and the anterior half of the head – namely, the great auricular, the trigeminal, and the facial.

The great auricular is the best important; one of its branches supplies the skin that overlies the lower half of the ramus of the mandible. All the rest of the skin of the area is supplied by the trigeminal nerve, which is the fifth cranial nerve. It derives its name from the fact that it is divided into three large nerves – opthalmic, maxillary, and mandibular – which escape from the cranial cavity separately. Each of those three divisions provides branches for the supply of the skin of the face and anterior half of the head.

The facial is the seventh cranial nerve; and its terminal branches are spent in supplying the muscles of the face, scalp, and auricle. These branches communicate freely among themselves; they also receive numerous communicating branches from the divisions of the trigeminal nerve which convey to them the sensory fibers for the muscles.

The supratrochlear nerve arises in the orbit. It is one of the two terminal branches of the frontal nerve, which is a branch of the opthalmic division of the trigeminal. It emerges at the supraorbital margin about a finger's breadth from the median plane, gives a twig to the upper eyelid, and supplies the skin of the forehead near the median line.

The supraorbital nerve is the other and larger terminal branch of the frontal nerve.It emerges through the supraorbital notch, sends filaments to the upper eyelid, and then divides into a lateral and a medial branch; each branch sends a twig through the bone to the mucus lining of the frontal sinus – that is, the cavity in the frontal bone above the nose and the orbit; and together they supply the skin of the forehead and of the top of the head as far back as the lamboid suture.

The zygomaticotemporal nerve is very slender. It arises in the orbit from the zygomatic branch of the maxillary division of the trigeminal nerve, enters the zygomatic bone and emerges again through its temporal surface, pierces the temporal fascia behind the frontal process of the zygomatic bone, and supplies the skin of the anterior part of the temple.

The auriculotemporal nerve arises in the infratemporal fossa from the mandibular division of the trigeminal. It comes to the surface at the upper end of the parotid gland, close to the auricle, immediately below the root of the zygoma. It gives branches to the upper part if the auricle and external auditory meatus, and then ramifies to supply the skin of the side of the head.

The temporal branches of the facial nerve come to the surface through the front of the upper end of the parotid gland, cross the zygomatic arch obliquely, and pass upwards and forwards into the side of the head and the forehead. They supply the anterior and superior auricular muscles, the frontal belly of the occipitofrontalis, and the upper part of the orbicularis oculi.

The greater occipital nerve is a large nerve. It is the cutaneous branch of the posterior primary ramus of the second cervical nerve. It reaches the surface by piercing the trapezius and the deep fascia at the superior nuchal line about an inch from the occipital protuberance. It divides into branches which communicate with the branches of the lesser occipital and great auricular, and supply most of the skin of the back of the head.

The third occipital nerve is very slender. It is the cutaneous branch of the posterior primary ramus of the third cervical nerve. It pierces the trapezius, supplies the skin of the uppermost part of the back of the neck and the skin over the occipital protuberance.


Arteries of the scalp and superficial temporal region

The the supraorbital artery and the supratrochlear artery are small. They arise in the orbit from the opthalmic artery, which is a branch of the internal carotid. They accompany the nerves of the same name.

The superficial temporal artery is a large vessel. It is one of the two terminal branches of the external carotid, and arises, behind the neck of the mandible, in or under cover of the parotid gland. It appears at the upper end of the parotid gland, pierces the deep fascia, crosses the posterior root of the zygoma immediately in front of the auricle and the auriculotemporal nerve, ascends in the superficial fascia of the temple, and, about an inch above the zygoma, it divides into an anterior and a posterior terminal branch. The posterior branch runs towards the parietal eminence. The anterior branch runs sinuously towards the frontal eminence; it can usually be seen through the skin, especially in elderly people, in whom the sinuosity is more marked.

The occipital artery is large. It arises from the external carotid in the front of the neck, winds round to the back, and finally enters the scalp by piercing the trapezius and deep fascia at the superior nuchal line on the lateral side of the greater occipital nerve. It ramifies over the back of the head.


Veins of the scalp and superficial temporal region

The veins anastomose freely, and form a network in the superficial fascia of the scalp and temple. The network is drained by veins that correspond to the arteries and lie alongside them in the scalp and temple, but do not accompany their proximal parts. There modes of termination are as follows:

The supratrochlear and supraorbital veins communicate with the veins of the orbit, and then unite at the medial angle of the eye to form the anterior fascial vein, whose blood passes eventually to the internal jugular vein.

The superficial temporal vein accompanies the corresponding artery in the temple, but, immediately above the posterior root of the zygoma, it unites with the middle temporal vein, which pierces the temporal fascia at that point; and the trunk formed by their union is the posterior fascial vein. This vein descends through the parotid gland, and terminates by dividing into anterior and posterior branches, which emerge through the lower end of the gland.The anterior branch joins the anterior facial nerve to form the common facial vein, which ends in the internal jugular. The posterior branch unites with the posterior auricular vein on the surface of the sternomastoid muscle to form the external jugular vein.

The occipital veins run downwards alongside the artery to the back of the neck; beyond that, a tiny vein is all that accompanies the artery, for the bigger veins then forsake the artery and pass forwards across the lateral border of the semispinalis capitis muscle to end in the suboccipital plexus of veins which lies under cover of that muscle. Emissary veins connect tributaries of the occipital veins with the venous sinuses inside the skull: one through the parietal foramen to connect with the superior sagittal sinus; another through the mastoid foramen to connect with the sigmoid sinus.


Lymph vessels of the scale and temple