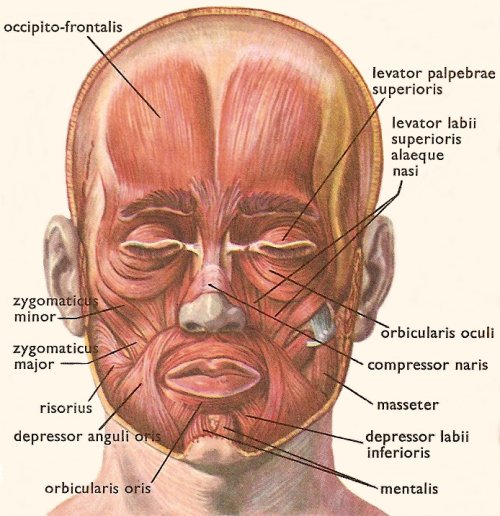 Muscles of the head.

The occipitofrontalis, also called the epicranial, is a muscle that covers parts of the skull. It has two pairs of bellies united by an aponeurosis.

The occipital bellies are shorter and narrower than the frontal bellies, and are completely separated from each other by an extension backwards of the aponeurosis. Each arises from the lateral part of the superior nuchal line, and is inserted into the posterior border of the aponeurosis.

Each frontal belly is a thin sheet of muscle that lies in the forehead and adjoining part of the top of the head, and has no bony attachments. Behind, it is continuous with the aponeurosis a little in front of the coronal suture. At the median plane, it is united to its fellow for a short distance above the nose. In front, it is inserted into the skin of the lower part of the forehead, being partly mingled with the orbicularis oculi before doing so; and, alongside the median plane, it sends down a small slip, called the procerus muscle, to be attached to the skin of the nose.

The epicranial aponeurosis is a strong, thin tendinous sheet – both long and wide – that overlies the top of the skull.

Anteriorly, it is continuous with the front bellies and sends down a spur for some distance between them. Posteriorly, it is continuous with the occipital bellies, but, between them, it is attached to the external occipital protuberance and the adjoining part of the superior nuchal lines. On each side, its margin is adherent to the temporal line, but also sends downwards a thin but fairly strong sheet which extends to the auricle and the zygomatic arch, deep to the superficial fascia and vessels and nerves in the temple.

Between the right and left temporal lines, the epicranial aponeurosis is connected only loosely to the pericranium by the layer of loose areolar tissue.

The looseness of the areolar tissue beneath the aponeurosis permits the united layer to be drawn forwards and backwards by the alternate contractions of the frontal and occipital bellies. The extent of the movement varies in different people, and depends on the degree of firmness with which the aponeurosis is attached to the back of the skull. The frontal bellies also corrugate the skin of the forehead, and are exercised in simulated surprise. The procerus muscles wrinkle the skin of the nose, both in laughter and in a disapproving grimace.

The muscle is supplied by the facial nerve – the frontal belly by its temporal branches, the occipital belly by the posterior auricular branch.