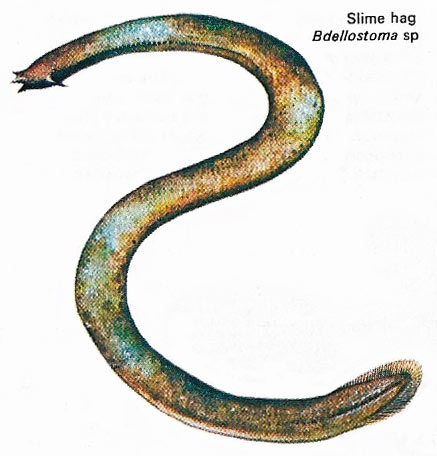 Fig 1. Hagfish scavenge the flesh of dead fish using sucking mouths and rasping tongues. At the same time they produce vast quantities of mucus from pairs of slime glands and this is thought to protect the hag and to make its prey die more quickly. All the 21 known species of hagfish are marine and have retained, over millions of years, the basic body organization of the early vertebrates, the first animals to have backbones. 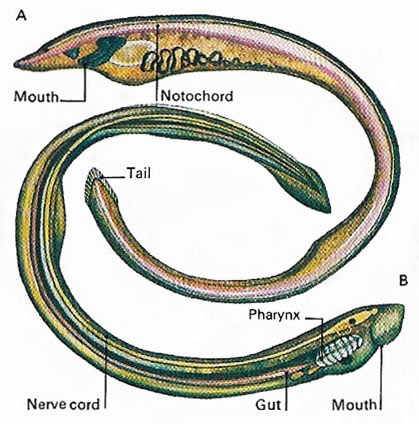 Fig 2. The ammocoete larva, the immature lamprey (B) is especially interesting because it resembles embryos of higher vertebrates. Unlike the larva of amphioxus (A) it has a heart, eyes and ears as in vertebrate embryos, as well as such typical chordate features as the notochord. Until metamorphosis was first observed, it was thought to be a species quite distinct from the lamprey. 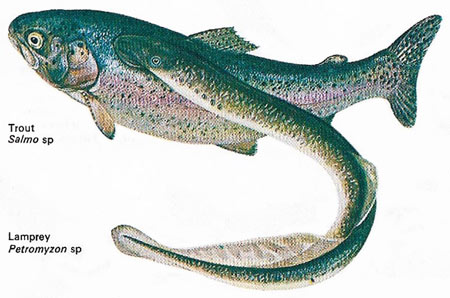 Fig 3. The parasitic lamprey feed by blood-sucking from its fish host until gorged. To enhance the blood-flow from its victim the lamprey injects a chemical that prevents blood clotting.

Agnatha is a class or subphylum of fish in the chordate phylum distinguished from the Gnathostomata by their lack of jaws. Among the Agnatha are two living groups, the lampreys and the hagfish, and a number of fossil forms that were common during the Ordovician, Silurian, and Devonian periods, 500–350 million years ago.

The earliest true vertebrates to appear in the Ordovician period were fish-like creatures that were possibly ancestral to the hagfish and lampreys – the most primitive vertebrates known today. Neither the hagfish nor the lamprey have jaws but both have a skeleton made of cartilage and have large notochords as well as gill slits. All lampreys and hagfish have tubular nerve cords lying above the "spine". The head of the lamprey bears organs of taste, smell and hearing and well-developed eyes while the hagfish head has a cluster of sensory tentacles round the mouth but poorly developed eyes.

Hagfish and lamprey are far from the most attractive of fish, in looks and in habits. The hagfish (Fig 1) are ocean scavengers, feeding on any dead or dying fish, crustaceans or molluscs they can find. On locating a dead fish the hagfish actually enters it through the gills or anus and devours the body contents leaving behind only skin and bones.

The world's species of lamprey can be divided into two groups according to their feeding habits. One group is parasitic and individuals attach themselves to their hosts with huge sucker-like mouths, break through the flesh with rasping teeth and suck out the blood (Fig 3 and 4). When the lamprey has eaten its fill it releases its oral grip and in doing so may inflict a fatal wound. Free-living lamprey's live only a few months. They feed normally as larvae but after metamorphosis the gut degenerates. The adult cannot feed and lives only long enough (a few months) to spawn.