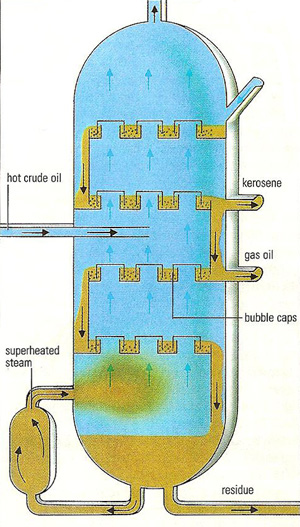 Hot crude oil is fed into the side of a tall column (up to 70m high) divided at 1 meter intervals by a series of trays. As the oil fills a tray, it overflows to the tray below, cascading slowly down the column. Hot steam entering at the base of the column rises up through the bubble caps in each tray, vaporizing part of the oil. On each tray the hot vapor from the tray below vaporizes some of the lower boiling material which rushes up the column. As it rises it cools, allowing part to condense back to liquid. In this way each tray separates a mixture with a slightly lower boiling point than the tray below. The mixtures required are run off from trays at different levels and passed to smaller columns (strippers) for further refining.

Fractionation is the separation of a mixture using fractional distillation or fractional crystallization. In the latter, the mixture is dissolved in a hot solvent. Then, as the solution gradually cools, the components of the mixture gradually crystallize out one at a time – the least soluble on first.

In fractional distillation, a liquid mixture is boiled and the vapor allowed to pass up a long vertical condenser, called a fractionating column. The lowest-boiling (most volatile) components in the mixture pass up to the top of the column, while the least volatile ones remain near the bottom. The various components – called fractions – can be drawn off at the appropriate levels. The technique is the key process in petroleum refining.