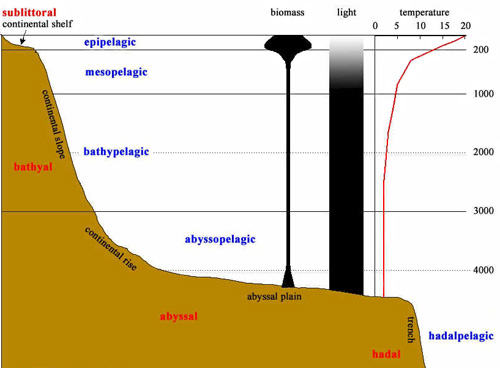 Fig 1. The abyssal and other oceanic zones. Image: Jeffrey Drazen, University of Hawaii. 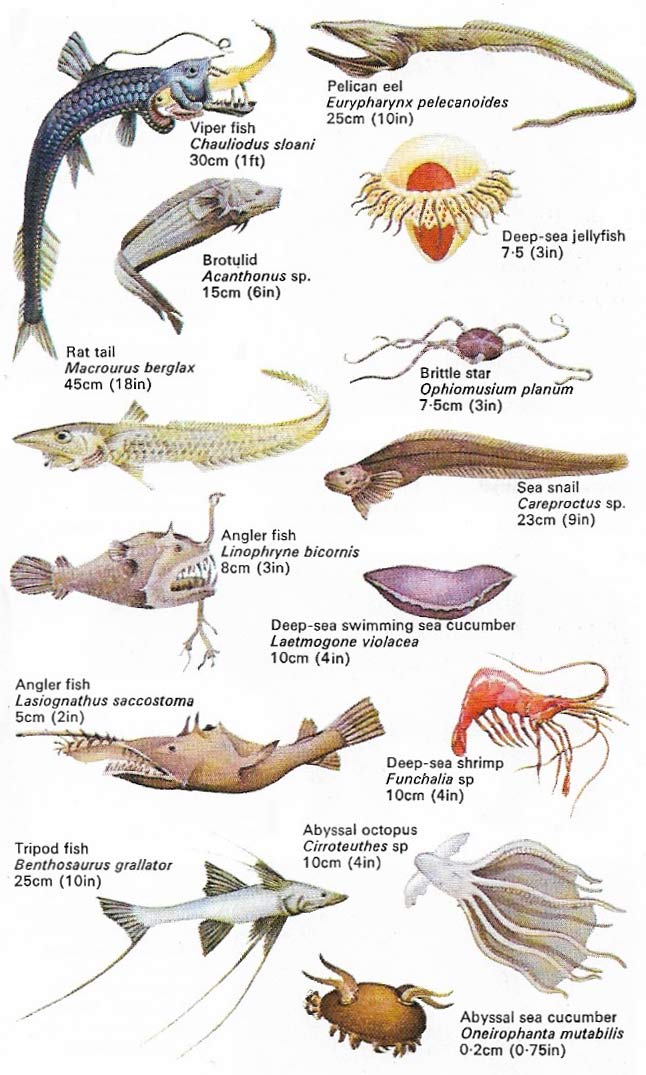 Fig 2. Below 3,000 m (10,000 ft) life in the world's ocean includes a range of animals,many of them weirdly shaped, adapted to living in near-freezing water at extremely hig hpressures. The only glimmers fg light in this pitch-dark region come from the bioluminescent organs that many of them possess. About 75% of the free-swimming species of fish in this region, representing 90% of the individuals, have light organs. These fish are small, few larger than 30 cm (1 ft) in length. Many deep-sea, bottom-dwelling fish such as the rat tails grow a little longer, although much of this elongation is accounted for by the tail. Few of these benthic creatures have light organs, bot manage to feed in darkness.

The abyssal zone is the part of the ocean that light does not reach. It lies below approximately 1,500 m with the position of the 4°C isotherm generally considered the boundary with the bathyal zone that lies immediately above (Fig 1). Abyssal organisms are adapted for life under high pressures and in cold, dark conditions.

Abyssal hills are low hills that occur on the deep ocean floor. Large stretches of the Atlantic and Indian Ocean floors and more than three-quarters of the Pacific floor are covered by such hills, which rise no higher than about 1,000 m (3,000 ft). They tend to occur as a series of parallel ridges 1–10 km across, and represent the roughed topography of mid-ocean ridges subdued by burial beneath thick layers of sediment.

Abyssal plains are very flat areas of the deep ocean floor which may extend for more than 1,000 km (600 mi). They typically have slopes with gradients of less than 1 in 1000 and are found off continental margins where sediments can enter the deep sea unobstructed. They are common in the Atlantic and Indian Oceans, but rare in the Pacific, where deep trenches and island arcs serve as barriers to the transport of sediment from the continents.

The problems of life at great depth – inky darkness, cold, and crushing pressures – have resulted in the evolution of many curious but beautiful species (Fig 2). The majority of deep-sea fish are 30 cm (1 ft) or less in length and most swim with their mouths permanently agape. Although often dark-colored, more than 60 percent of all deep-sea animals have light-producing organs. Their bioluminescence is used for recognizing neighbors and mates and confusing predators.