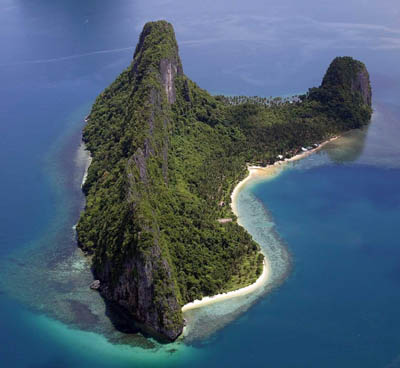 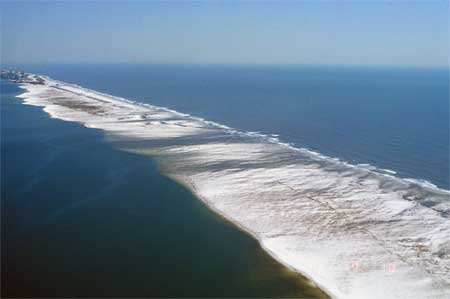 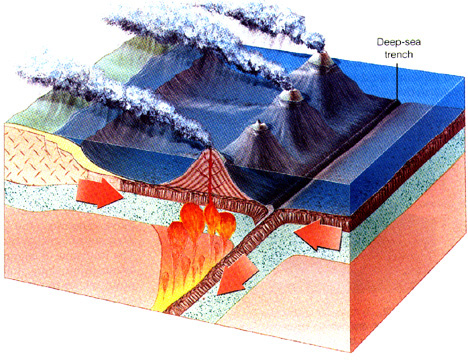 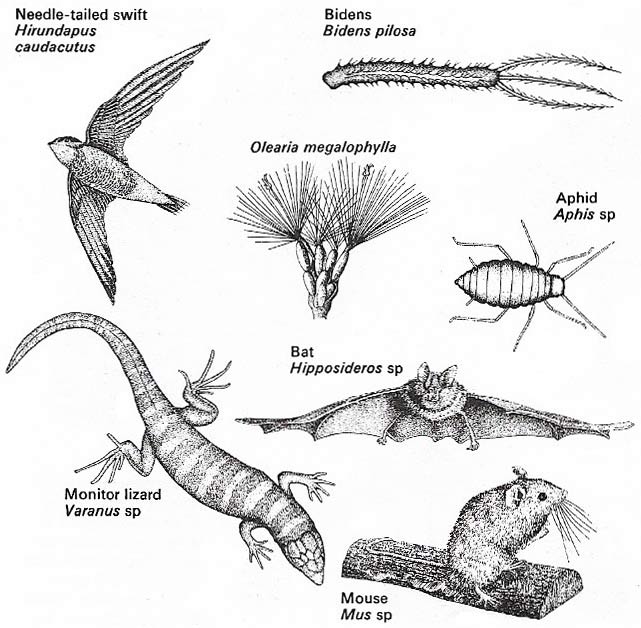 Fig 4. Many kinds of organisms are likely to colonize islands. They include a number of medium-sized birds such as the swift, since smaller ones are unlikely to survive the journey and big ones are not so easily blown off their course. The birds may carry fruits such as those of Bidens hooked in their plumage. Tiny insects, such as aphids, might be carried by air currents, along with plumed fruits of plants such as Olearia. Lizards can survive long-distance sea travel on vegetation rafts, as also can rats, mice, and other small animals. Bats, too, will make short sea journeys and even survive long ones. 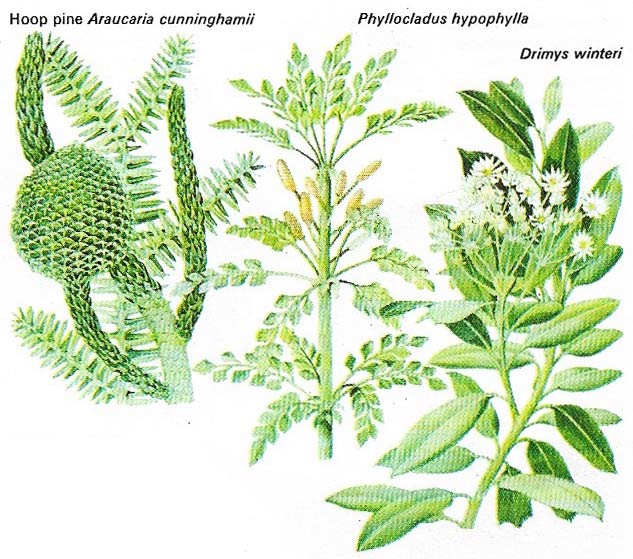 Fig 5. Some islands far from land are of continental origin. Their rocks, plants, and animals proclaim this, for the same species may also be found on major land masses. The plants illustrated grow in New Guinea. Their seeds cannot survive in seawater nor are they adapted for transport by animals or the wind. 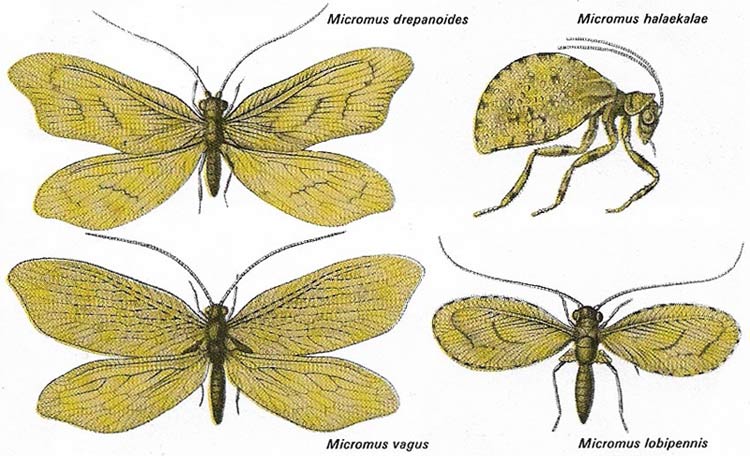 Fig 6. The lacewings that have reached the Hawaiian islands have undergone great changes to adapt them to life where flight can mean destruction by being blown out to sea. In some species, such as Micromus drepanoides and M. vagus, wings have become large and heavy, with angular corners, thus making flight almost impossible. In other forms the hindwings are almost totally absent (M. lobipennis). Some species with reduced hindwings have forewings that are studded with thickened areas that increase their weight and hamper flight, such as M. halaekalae. 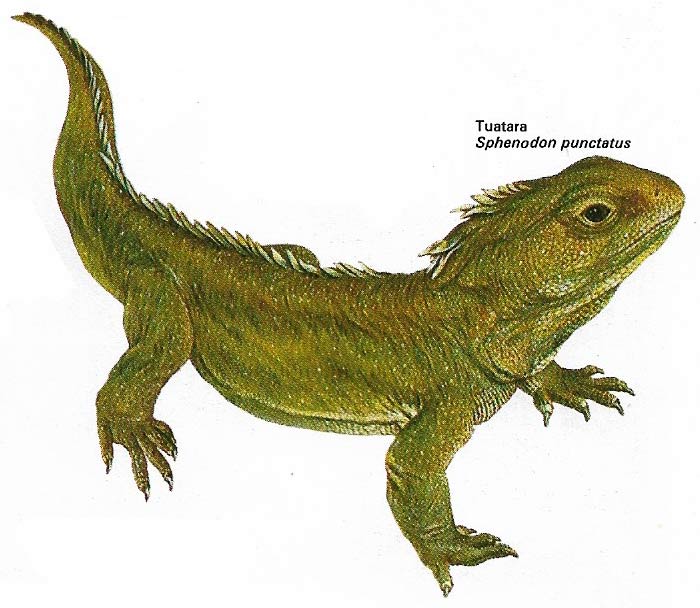 Fig 7. The tuatara is a rare "living fossil" surviving in the security of a few small islands off the coast of New Zealand. At one time, its relatives were abundant overmuch of the world. 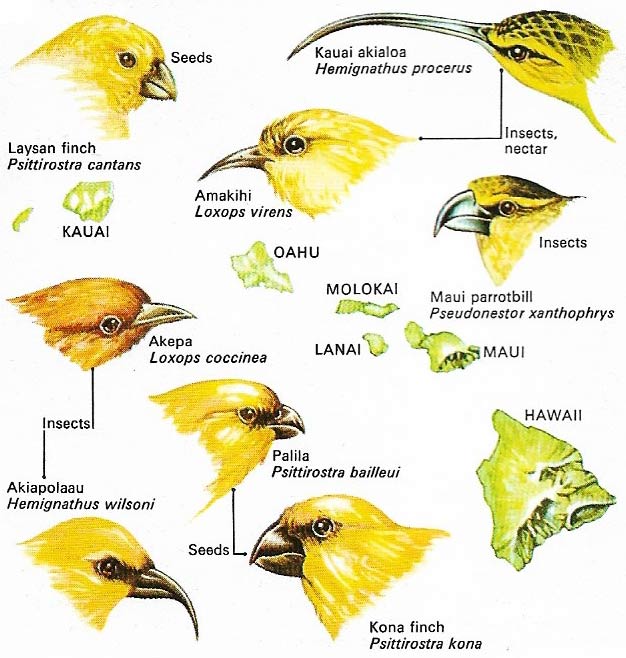 Fig 8. The honey-creepers of the Hawaiian islands probably have as ancestors a species of tanager (a widespread American bird family) that used, long ago, to migrate there. Their beak shapes show that some feed on nectar, others on insects or seeds. Among them they fill a variety of ecological niches. 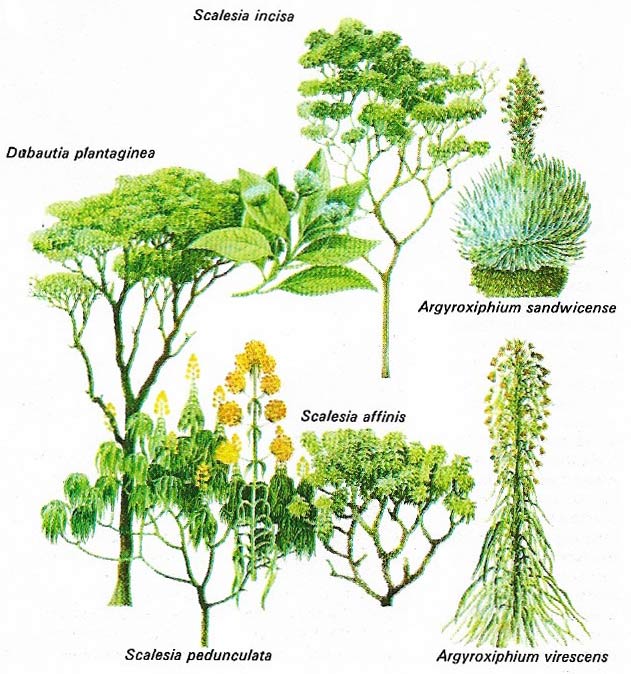 Fig 9. The plumed fruits of dandelion-like plants (family Compositae) are carried long distances by the wind. On remote islands they often develop into tree-like plants adapted to extremes of climate or other conditions. Dubautia spp and Argyroxiphium spp of Hawaii and Scalesia spp of the Galapagos are all woody and tree-like in form.

An island is a comparatively small land area entirely surrounded by water. It may be a result of the buildup of the cone of a submarine volcano, erosion by the sea or glaciers of a parts of coastal regions, diastrophism, or other processes.

A barrier island is any long, low island of sand parallel to a shore and permanently separated from it (Fig 2). A barrier island may be composed of dunes, swamps, and areas of vegetation.

An island arc (Fig 3) is a curving chain of volcanoes to the convex side of which is a deep ocean trench. The volcanoes rest on the plate of lithosphere that is not moving down into the Earth. Their andesitic lavas may be formed from the partially melted material of the descending plate. Northern Japan and the Aleutian Islands are examples. Island arcs are often associated with earthquake activity.

Oceanic islands produced by the eruption of undersea volcanoes are, for some time afterward, unsuitable for any kind of life. Eventually, however, the lava cools and the area begins to become habitable. Chance is an important factor in colonization, but some organisms will manage to reach the land and in time even the most remote islands will become populated.

Certain kinds of vegetation and animals are adapted to travel to islands by air or sea (Fig 4). Some plants produce numerous spores or very light airborne seeds, such as those of the daisy family (Compositae) that stand a better chance of making a sea crossing than do the large, heavy fruits of forest trees. Some plants have seeds that may be carried by birds, either hooked to their plumage or in mud on their feet. In a few cases seeds are carried in a bird's digestive system but the speed at which birds digest their food limits the chances of the seeds surviving long journeys. Some plants, notably the "coco de mer", the rare Seychelles double coconut, have well-protected floating seeds adapted to be spread by the sea. But it is doubtful whether most seeds can survive immersion for more than a few weeks.

Among the animals, many tiny creatures are carried in the upper air currents. Aphids and minute spiders form a large part of this "aerial plankton". Most die before they are dropped but a few survive to fall on to dry land and colonize new areas. At lower altitudes large insects and birds whirled along by a storm may make landfalls thousands of miles from their starting-points.

Water travel is more difficult for land-dwelling animals. Gigantic rafts of vegetation, which are sometimes swept down to the sea by tropical rivers in flood, can become floating islands able to carry a number of small, tree-living animals to a distant landfall. The most successful colonists, however, are the reptiles, and the fauna of most tropical islands includes lizards and tortoises. Inside the timbers of a vegetation raft the grubs of beetles and other insects continue to gnaw their way, unaware of their changed circumstances. They may hatch out far from the place where the eggs were laid. The beetle fauna of many islands consists largely of wood-boring forms.

Once ashore on an oceanic island a degree of luck must be present to ensure survival. An animal arriving on a barren island will soon die from lack of food or water. But should the basic needs of life be available the new arrivals make find themselves in an open environment in which the ecological niches remain unfilled. The adaptability inherent in every living organism enables the newcomers to occupy some part of the available living space. In many instances (8) the descendants of a single species have diverged widely to form several new and different species adapted to the conditions on an island.

Certain trends can be seen among animals and plants on islands. One is increase in size for, in general, the lack of competition allows larger organisms to take what food is available. If predators are rare the need to be small or swift for protection will disappear. Giant forms, particularly of reptiles, can be found on tropical islands. Birds and insects are often markedly larger than their ancestors, and plants may evolve from herbaceous types into tree-like forms.

Islands are windy places and organisms that have been blown there may well be blown off again. Successful colonizers often lose their power of flight and many species of flightless birds are known in remote places. Flightlessness and large size are often combined and giant flightless birds, such as the extinct elephant birds of Madagascar and outside flightless insects, such as the lacewings of Hawaii (Fig 6), inhabit remote islands. Among plants, the fruits may become heavier and less likely to drift out to sea again.


The chance to survive

Although large animals cannot reach distant islands they are sometimes cut off from the main population by changes in sea-level. When this happens the opposite kinds of changes occur to those found in birds on remote islands. Large mammals make heavy demands on their environment and because islands tend to be restricted in size the smaller creatures, whose needs are simpler, stand the best chance of survival. Examples of this can be seen on many continental islands. The race of sika deer (Cervus Nippon) found in Japan, for example, are smaller than the mainland forms. An extreme case is that of elephants and hippopotamuses isolated on Mediterranean islands some two million years ago, during the Pleistocene, by rising sea-levels. Fossil evidence shows that these creatures developed into miniature forms as small as Shetland ponies.


The arrival of humans

Plants and animals of remote islands often survived in a very delicate ecological balance until the arrival of man. To humans, the large, slow creatures meant little more than a convenient food supply and in many cases (6) they were virtually or entirely wiped out soon after their discovery. The lack of natural enemies often the led the animals to be so trusting that their destruction was more certain. The introduction of domestic animals, especially pigs and goats, has in many cases also caused the destruction of the unique flora of some islands, as well as bringing the native animals to the point of extinction.