Fig 2. Oceanic ridges are found where two plates (1, 2) are moving away from each other. Magma from the mantle (3) continuously wells up from below. As the magma cools, it becomes part of the plates and it is in turn injected by fresh magma. The ridges are thus the newest part of Earth's crust, while the oceanic crust is found where it plunges into the trenches. 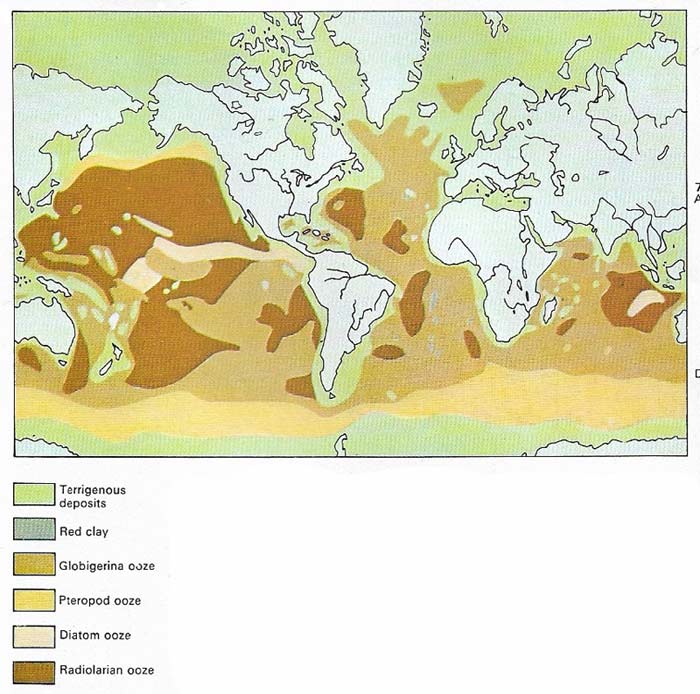 Fig 3. Deep-sea sediments are related to surface water temperature, depth, and distance from land. Terrigenous deposits consist of mineral particles derived from the weathering of land rocks. They are carried out to sea by rivers and winds and are found near the coasts. The deep sea floor is often blanketed by ooze which is formed by the ednless "snowfall" of the shells or skeletons of countless tiny planktonic animals and algae. Globigerina and radiolarian ooze are made from the remains of single-celled animals with calcareous and siliceous skeletons respectively. Occasionally the shells of pteropods, small swimming molluscs, form deposits of pteropod ooze. In cold seas, silica-shelled microscopic algae, the diatoms, thrive and form diatom ooze. In areas away from land and where planktonic life is scarce, atmospheric dust settles very slowly as abyssal red clays. 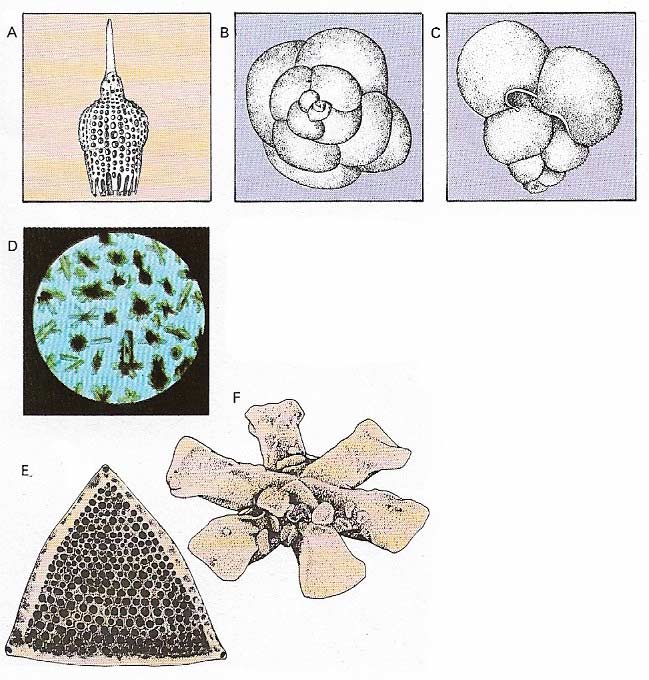 Fig 4. Constituents of marine sediments include microorganisms and new (authigenic) mineral formed on the seabed, as well as clays. Radiolarians, such as Calocycletta virginis (A) are single-celled animals with siliceous skeletons. Foraminifera such as Globigerina nepenthes (B) and Globigerinoides ruber (C) are single-celled animals with calcareous shells; together with radiolarians they can be used for dating the sediments. Siliceous diatoms (E) and the tiny calcareous plates from flagellates known as coccoliths (F) are also common. Philipsite (D) is a typical authigenic mineral of the deep sea. 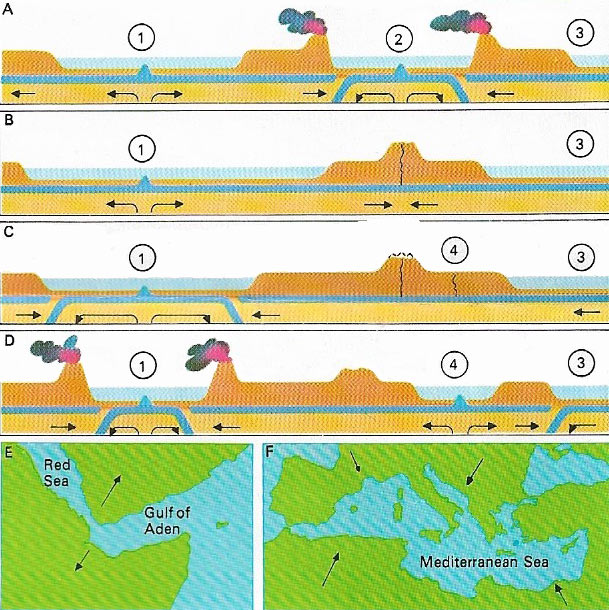 Fig 5. The birth and death of oceans is a continuous process. In (A) ocean 1 is growing by seafloor spreading from a mid-ocean ridge while ocean 2 is closing because of the continents forcing the oceann floor down at the trenches. Ocean 3 is young and growing. In (B) ocean 1 has reached maturity, ocean 3 is still growing. Ocean 2 has disappeared with the joining of the continental masses. In (C) oceans 1 and 3 are decliining while a new crack appears at 4. (D) shows ocean 1 still declining and ocean 4 growing. (E) shows a widening of the Red Sea and Gulf of Aden while (F) indicates that the Mediteranean Sea has been steadily shrinking. 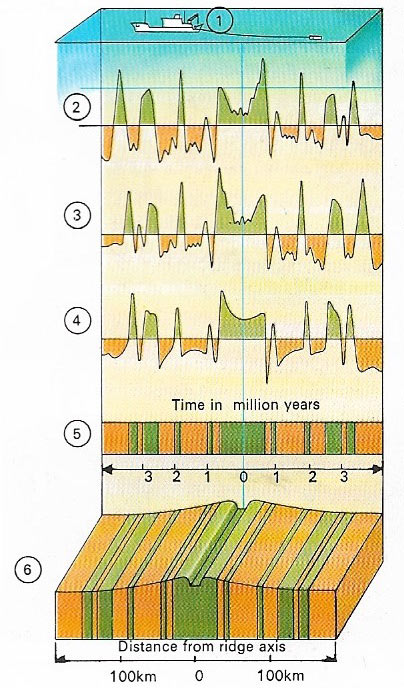 Fig 6. A magnetic survey from a research ship (1) sailing back an forth over a mid-oceanic ridge gives readings (2, 3, 4) that indicate that the magnetism of the rocks of the seabed points alternately north and south in a series of bands parallel to the ridge (6). The pattern of bands is identical at each side of the axis and corresponds to the pattern of reversals in Earth's magnetic field for the last few million years (5). The rocks moving away from the axis carry a record of Earth's magnetic field.

Fig 7. Destruction of the oceanic crust takes place wher one plate (1) sinks beneath the other (2), forming a trench (3), while the dipping plane forms the subduction zone (4). Friction along this zone creates localized melting (5) and lava rises to the surface, creating volcanoes (6) forming island arcs (7).

The seafloor, also known as the seabed, is the floor or bottom of the oceans. The major features of the seafloor are the continental shelf, the continental rise, the abyssal floor, seamounts, oceanic trenches, and mid-ocean ridges (Fig 1). The abyssal or deep ocean floor is about 3 km (1.8 miles) deep and is mostly made of basaltic rock covered with fine-grained (pelagic) sediment consisting of dust and the shells of marine organisms. Oceanic trenches are up to 11 km (7 miles) deep, typically 50–100 km (30–60 miles) wide and may be thousands of km long. The slopes are usually asymmetrical with the steeper slope on the landward side and a more gentle slope on the side of the ocean basin. They are regarded as the site of plate subduction. Oceanic ridges (Fig 2) are long, linear volcanic structures which tend to occupy the middle of seafloors; they are the sites of crustal spreading.


Exploration of the seafloor

The floor of the ocean has always fascinated people. Plato's legendary lost continent of Atlantic, "beyond the Pillars of Hercules", has never lost its hold on the imagination although there is no geological evidence to support the belief that it lay south of the Azores, on the mid-Atlantic Ridge.

Early knowledge of the seafloor was restricted to depth soundings, taken by lead and line, of the areas around the known islands. Magellan tried, and failed, to reach the botton of the Pacific with 370 m (1,200 ft) of rope. The first true oceanic sounding was made by James Clark Ross in 1840, when he measured a depth of nearly 3,700 m (12,140 ft) with a line.

The epic voyage of HMS Challenger which led to the first true oceanic depth survey was made between 1872 and 1876. The Challenger expedition used sounding weights with tube-like cups to obtain a sample of material forming the seafloor. Thus, when Jules Verne (1828–1905) wrote Twenty Thousand Leagues Under the Sea (1870), the first systematic knowledge of deep sediments was being developed. The classification of these sediments, which was first developed by the Challenger expedition's geologist John Murray (1841–1914), and others who studied the samples after the ship's return, has been improved but never completely discounted.

Even so, the widely prevalent idea that the seafloor consisted of a sandy waste extending for thousands of miles, dotted with a few islands and occupied by exotic fish, was gradually discarded. The early samples of sediment obtained by Challenger, and the soundings obtained in the mid-Atlantic which actually mapped the mid-Atlantic Ridge, did not lead to a full understanding of the variation in the extent and thickness of the sediments. They did not supply any scientific reasons for this variation nor was it appreciated that mid-ocean ridges ran through all the world's major oceans.

During the 20th century, improved coring devices greatly enlarged the collective knowledge of oceanic sediments (Fig 3, 4). The actual topography of the deep ocean was revealed by echo-sounding using sonic or ultrasonic signals. Scientists calculated the depth of the water by noting how much time passed between sending the signals and receiving the echoes. Since the 1940s seismic methods have also been used; they have shown that the seafloor is made up of hills, volcanic mountains, island complexes – of which the islands are only the visible tips – and of huge and complex submarine mountain chains, with median rift valleys, faults, and numerous flanking ridges.

Seafloor spreading is an important phenomenon arising from plate tectonics. Along mid-ocean ridges material emerges from the Earth's mantle to form new oceanic crust. This material, primarily basalt, spreads out to either side of the ridges at a rate of the order of 10–50 mm per year (Fig 2, 5). Newly laid down basalt is able to "fossilize" the prevailing geomagnetism: the main evidence for seafloor spreading comes from the symmetric pattern of alternately magnetized strips of basalt on either side of the ridge.

Mysterious zebra patterns of magnetic anomalies were mapped on the ocean floor. In 1963 two Cambridge University graduate students, Frederick Vine and Drummond Matthews, explained these in a way that strongly supported seafloor spreading. They suggested that material welling up from the mantle along a ridge acquires a remanent magnetization as it cools which is parallel to the the prevailing magnetic field of the Earth. Earth's magnetic field is known to have reversed its polarity many times during geological history. Assuming that the newly forming crust at oceanic ridges picked up the prevailing polarity signal of Earth's magnetic field, the result over a long period of time would be strips of ocean floor that were alternately normally and reversely magnetized. The correspondence between the patterns on the ocean floor and the known history of Earth's magnetic field is too remarkable to be due to chance (Fig 6).

By 1966 the hypothesis of seafloor spreading had been further established by independent oceanographic data involving microfossils, sediment thickness (thicker on older crust where sediments had more time to accumulate), measures of heat flow from Earth's interior, and paleomagnetic and seismological studies. The expression "global tectonics" came into use in 1968 to explain the links between spreading ridges, transform faults, sinking trenches, drifting continents, and mountain-building.

Also in 1968, the United States commissioned the deep-sea drilling ship Glomar Challenger for a major campaign of oceanographic exploration. Drilled cores were collected from all the oceans and seas and the seafloor has been directly dated, proving beyond doubt the global tectonics theory.