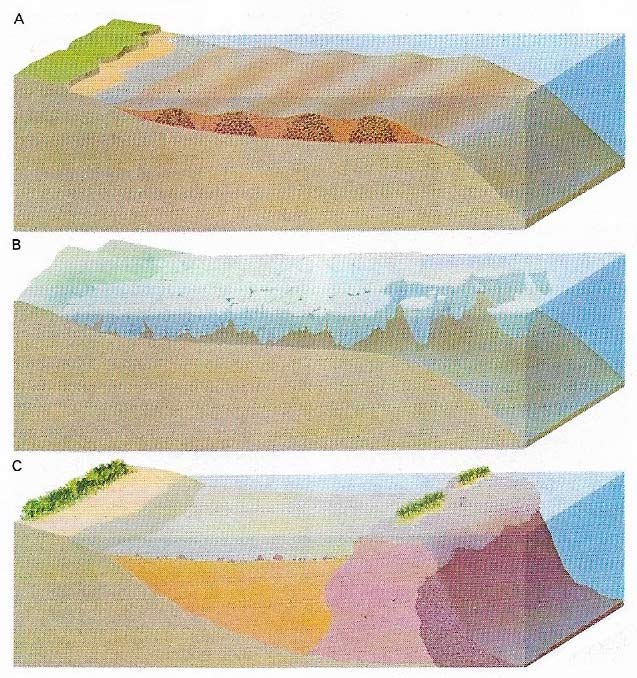 Continental shelves are the regions immediately off the land masses. There are several different sorts. Off Europe and North America the shelf (A) has a gentle relief, often with sandy ridges and barriers. In high latitudes, floating ice wears the shelf smooth (B) and in clear tropical seas a smooth shelf may be rimmed with a coral barrier like the Great Barrier Reef off eastern Australia (C), leaving an inner lagoonal area "dammed" by the reef. 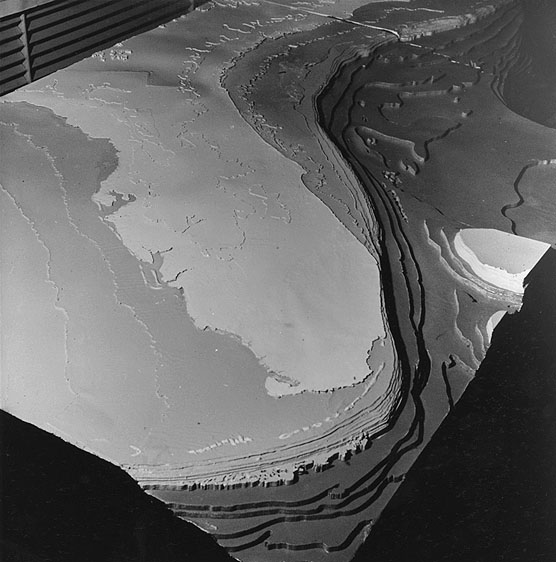 Model of the Atlantic Continental Shelf and Slope built during 1964 by a Woods Hole Oceanographic Institution - US Geological Survey team. The model is patterned after a three-sheet map series of the shelf and slope at a scale of 1 in = 16 mi. With vertical scale exaggerated, this view shows the ocean bottom contours around Florida. Credit: U.S. Geological Survey.

A continental shelf is the portion of a landmass that is submerged in the ocean to a depth of less than 200 m (650 ft), resulting a rim of shallow water surrounding the landmass. The outer edge of the shelf slopes towards the ocean bottom (see abyssal zone), and is called the continental slope.

A continental shelf can be quite narrow, as, for example of the west coast of South America, but in places can be more than 150 km (90 mi) wide – for example, in the North Sea and around Britain. The shelf is a region of sand banks and sand waves (underwater dunes). In the North Sea, sand waves are formed as masses of loose sand move around like sand dunes in the desert, propelled by currents. The shallows contain rich food for fish, and therefore some of the world's major fishing grounds are on continental shelves. Other areas of continental shelf, such as the North Sea and the Gulf of Mexico have been exploited for oil and natural gas. Sometimes, as in the Gulf of Mexico, these oil and gas reservoirs are associated with salt domes.


Life on the continental shelf

The continental shelf is inhabited by many kinds of seaweeds, as well as numerous animals including corals, sea anemones and other coelenterates, many species of burrowing worms and minute colonial rock-encrusting animals (Bryozoa), and clams, mussels, oysters, scallops, and other molluscs. There are sea urchins, starfish, brittle stars, sea-cucumbers, and sponges. Bottom-dwelling fish, such as plaice and flounder, also live in the continental shelf.

At the edge of the continental shelf, at about 200 m (656 ft) depth, the seafloor begins to dip markedly down: this is the upper boundary of the continental slope. It is dissected in places by submarine canyons, in which underwater avalanches, known as turbidity currents, carry mud, pebbles, and sand far out to sea and deposit them at the foot of the slope, on the continental rise, at depths of about 2,000 m (6,650 ft). Life is much more scarce on the continental slope and rise: large free-swimming molluscs – octopus, cuttlefish, and large squid – brittle stars, worms, and strange fish are among the most common species.

The continental rise leads to the abyssal plains – vast empty basins occupied by few, even stranger fish, worms, brittle stars, and deep-sea, free-swimming molluscs, with no plant life to speak of. From these plains rise huge mountain ranges, the mid-ocean ridges, from 4,000 m (13,200 ft) deep to some 1,000 m (3,300 ft) below the surface with occasional peaks reaching the surface as islands. Seamounts also rise from the abyssal plains, sometimes part of island-chains like the Hawaii-Emperor chain in the Pacific, but ofen isolated. They are nearly all volcanic and may be crowned with coral, formed when they were near the surface.