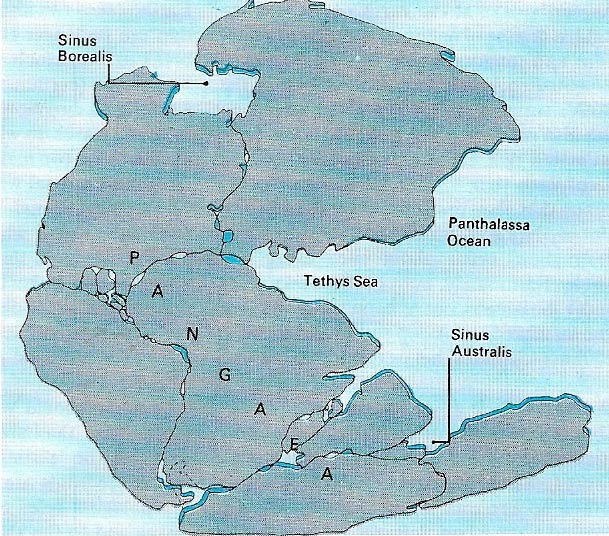 Fig 1. The theory of continental drift proposes a period when all the continents formed one land mass. The initial breakup made a northern mass, Laurasia, and a southern one, Gondwanaland, called after a province in India. 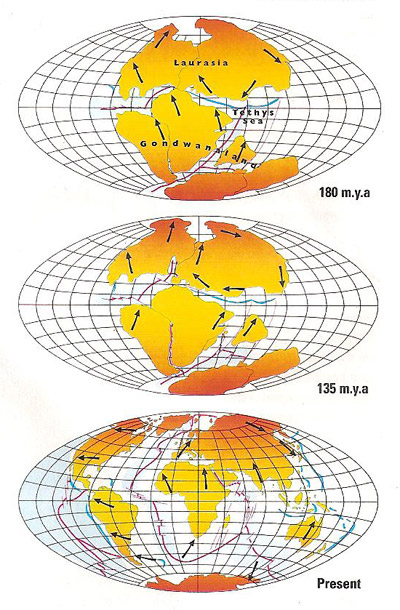 Fig 2. About 200 million years ago, the original Pangea land mass began its split into two continental groups, which further separated over time to produce the present-day configuration. 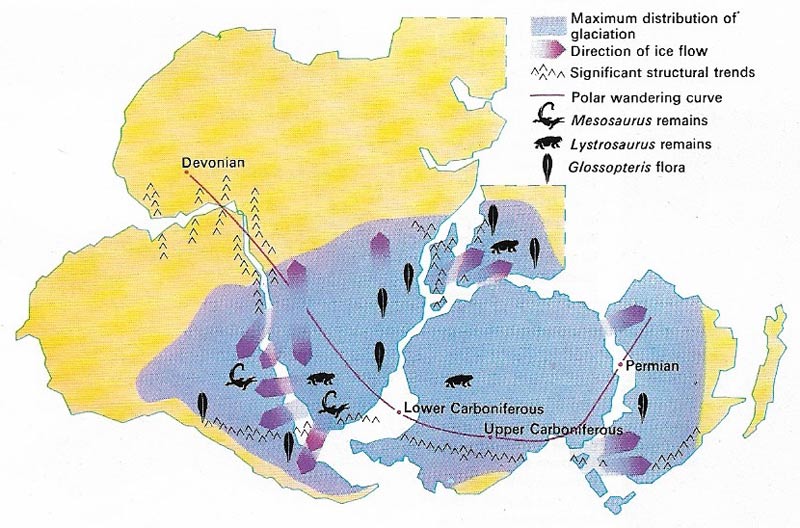 Fig 3. The theory of continental drift proposes a period when all the continents formed one land mass. The initial breakup made a northern mmass, Laurasia, and a southern one, Gondwanaland, called after a province in India. 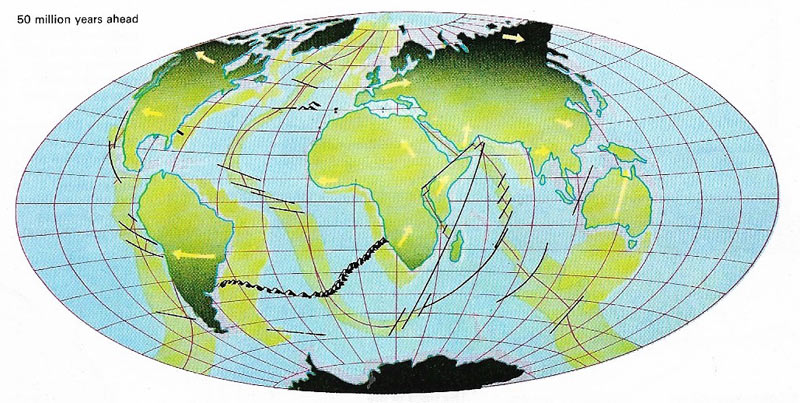 Fig 4. The continents are still drifting, and there is no reason to expect them to stop. The map shows how the world may look 50 million years from now if drift is maintained as predicted. The most striking change is the area of new land in the Caribbean, the splitting away from the USA of Baja California and the area west of the San Andreas fault line, the northward drift of Africa almost eliminating the Mediterranean, and the breaking away of that part of the continent east of the present-day rift valley. Australia has continued its journey northwards, but Antarctica remains in its present southerly position.

The idea that the continents were once joined together is by no means a new one. It was held by Francis Bacon (1561–1626) in 1620 and in 1628 R. P. Placet published a book in French whose title, in translation, means "The corruption of the great and little world, where it is shown that before the deluge, America was not separated from the other parts of the world". The first map showing the fit of the continents was published in 1858 by A. Snider-Pelligrini who based his theory on the similarity of the fossil plants which had been found in various parts of Europe and North America.

The theory of continental drift was first rigorously formulated by Alfred Wegener (1880–1930), a German meteorologist. An American, F. B. Taylor, had independently put forward the same idea a few years before Wegener's first lectures on the subject in 1912. The theory was later amplified by du Toit, to explain a number of geological and paleontological phenomena.

Like others before him, Wegener had been attracted to the idea of drifting continents because of the appearance of the land masses on the world map. He showed great skill in reconstructing the ancient land masses in arguing his case and brought carefully assembled geological, geodetic, geophysical, paleontological, and paleoclimatic evidence into his discussions. All of these facets of geology had to be considerably developed before they provided evidence of such a substantial nature that almost all geologists accepted the theory.

It was geologists in the Southern Hemisphere who collected evidence that strongly supported Wegener's own theories. Glaciation during the Permo-Carboniferous times was more intense and widespread than that of the more recent Pleistocene ice age. Geological fieldwork revealed evidence of it in South America, Africa, Australia, India, Antarctica, and Madagascar. Geologists examining deposits of till (sediment carried and deposited by a glacier) and fossil plants were able to correlate them between the continents. If these land masses had always been fixed in their present positions, it would mean that the ice stretched from the polar regions to the equator – clearly a preposterous idea. Joining the areas together not only reconciled the geological facts but also provides evidence of the land mass wandering over the South Pole. This, in turn, allows for an explanation of the other known climatic belts of the world during this period; for example, tropical conditions experienced in northern Europe during the Carboniferous period.

Work in India and Australia proved the existence of links between these continents: for example, the basins of Permian age in northwest Australia can be correlated with those of India, and features of eastern Australia match those of Antarctica.

The close links between the geology of West Africa and Brazil provided further proof of their former contact. There is a clear boundary between the 2,000-million-year-old rocks of West Africa and the much younger geological province (about 400 million years old) to the east. The boundary between these two is near Accra in Ghana and it heads out into the Atlantic Ocean in a southwesterly direction. The continuation of this boundary in Brazil was found by a geological expedition exactly as was predicted at Sao Luis.

The drawing together of the now widely separated northern lands (North America, Europe, and Asia) was a little more difficult, but there now exists overwhelming evidence for their once having formed part of a single continent, Laurasia (Fig 2). Geologists have shown that the now widely separated Norwegian, Caledonian, Appalachian, and east Greenland mountains were originally formed as a single chain.

Wegener paid considerable attention to the distribution of fossils. When his theory was first put forward, paleontologists were still postulating land bridges to account for the distribution of some plants and animals in the fossil record. In many cases the land bridges would have to have covered an area equal to that of the continents they joined. It was long assumed that the land bridges disappeared by subsidence. The detailed study of ocean floors beginning the 1960s ruled out this idea. If, however, the idea of Gondwanaland – the old grouping of the continents of Africa, South America, Antarctica, India, and Australia – is accepeted (Fig 3), it becomes much easier to explain the distribution of many animals and plants. For example, remains of the reptile Mesosaurus, which could not have swum an ocean, have been discovered only in western South Africa and in Brazil.

Recent investigations, especially the study of paleomagnetism (the history of Earth's changing magnetic field), have provided data which not only support continental drift but also locate the positions of the various land masses during past geological time. Perhaps the most important impetus to the theory of continental drift has come from the twin theories of seafloor spreading and plate tectonics which were rapidly developed in the 1960s. One of the weakest points of Wegener's original arguments centered on the tremendous forces necessary to drive the continents apart. These new theories, which have been substantially proven, provide an explanation of the necessary motive power, but there is still much to learn about the breakup of Pangea, the original continent.

In recent years continental movement has been confirmed by direct measurements made by global positioning satellites using laser beams. The continents change position very slowly, moving over the Earth's surface at the rate of only a few centimeters per year, adding up to thousands of kilometers over geological time.