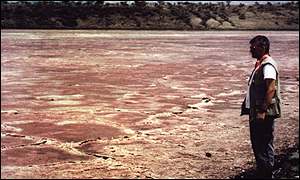 Salt flats at Lake Magadi, Kenya. The flats are red due to the proliferation of halobacteria.

Halophiles are microbes, including bacteria and archaea, which live, grow, and multiply in highly saline environments. They are a type of extremophile. Extreme halophiles, all of which are archaea, apart from the green alga Dunaliella salina, inhabit water that is up to 10 times more saline than ordinary seawater (approximately 30 percent salt content) including that found in the Great Salt Lake in Utah, Owens Lake in California, the Dead Sea, and saltines. They are mostly aerobic, have specialized cell walls, and incorporate pigmentation in the form of bacteriorhodopsin, for photosynthesis, and carotenoids for ultraviolet protection. The carotenoids give them a pinkish color, which can be see in the accompanying photo. To prevent an exodus of water from the cell, halophiles offset the high salt in the environment by accumulating such compounds as potassium and glycine-betaine. This allows a balance of salts inside and outside of the cell preventing water from flowing outward as would be the case if lower salt levels existed within the cells.

Saltwater can evaporate leaving evaporite deposits consisting of salts such as sodium chloride (halite) and calcium sulfate (gypsum). Within evaporates are fluid inclusions – small trapped pockets of water – that can provide a refuge for microbes for at least six months. Cyanobacteria trapped within dry evaporite crusts can continue to have low levels of metabolic function such as photosynthesis. These deposits also form fossils of the organisms trapped within. Although highly controversial, it has been claimed that bacteria might survive for millions of years in the fluid inclusions of salt deposits including evaporates. Intriguingly, such deposits have been found on Mars.

In fact parallels are being drawn between locations such as the Bonneville Salt Flats that surround the Great Salt Lake and Meridiani Planum on Mars where the Mars Exploration Rover Opportunity landed. Opportunity discovered that it was parked on top of an evaporate basin, the remnants of an ancient martian salty sea, just as the Great Salt Lake and surrounding flats are the remnants of a much larger, ancient body of water – Lake Bonneville – which drained away thousands of years ago. As the conditions on early Mars got colder and harsher, it lost liquid water through evaporation or sequestration into permafrost. Remaining bodies of water would have been increasingly salty places, and then finally all liquid water disappeared, and the salt deposits eventually lithified into the evaporate rocks the rover sees today. Any early martian microbe would have had to withstand a high salt environment and intense UV radiation.

The suggestion that Jupiter's moon Callisto may have an underground saline ocean also raises the possibility that primitive life forms similar to terrestrial halophiles might be found there, as well as on the neighboring moon, Europa.