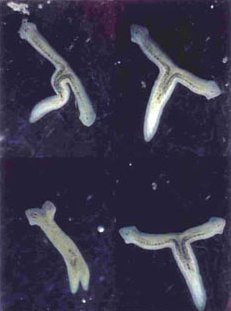 Regeneration is the growth of new tissue or organs to replace those lost or damaged through injury. All animals and plants are capable of regeneration to some extent but, as a general rule, the more highly evolved an animal is, the less are its powers of regeneration. Humans, for example, are able to regenerate skin and bone tissue to mend wounds and fractures, but are unable to regrow even a finger if one should be lost. Some internal organs can be regenerated if a large enough part remains as a starting point. The liver is an example; so, too, are the adrenal glands. The replacement of worn-out tissues is a form of regeneration and goes on throughout life. The most obvious is the replacement of skin from below as the outer layers rub off.

Some animals are able to regenerate new limbs – in fact lizards may actually shed their tails themselves to confuse enemies and later grow knew ones. Crabs, too, can throw off a limb to escape from an enemy. The most striking cases of regeneration, however, are found among the lower animals – the cnidarians and the flatworms.

Flatworms are built up of three layers: an external ectoderm, an endoderm lining the gut, and a mesoderm occupying the space between the two. Planarians are flatworms with great powers of regeneration. As long as all three types of tissue are present, a complete new worm can grow from a tiny portion.

When a planarian is cut in half, both halves can form new animals. The cells of the damaged region lose their individuality and all become alike. They grow and divide and the growing mass takes on the correct shape – be it of a head or a tail. Gradually the cells become specialized again and begin their normal functions. The head region is the coordinating region and, if missing, is always the first formed structure in a regenerating body. Not until there is a head, can the other organs be reformed.

A fragment of a flatworm can regenerate into a new individual as long as there is sufficient food reserve in the tissue. The fragment has no mouth and feeding organs and so cannot get any food from outside. The cells at the cut surface (sometimes all the cells in the fragment) become alike and multiply. Because food is used up during this process, the fragment gets smaller, but if sufficient cells can be formed, a tiny planarian will develop. Any original organs remaining in the fragment will be partly absorbed so that they conform in size to the rest of the new animal. A new head is formed before the rest of the body develops.

Any fragment of a planarian that regenerates naturally will produce a head at the original front end. Although the cells are completely reorganized they never lose their polarity. Regeneration in jellyfish is very similar, but in higher animals, the head cannot be regenerated. New limbs and bodies can form under the influence of the head but not vice-versa.

Earthworms are able to regenerate new bodies as long as the front part containing the vital organs is present. The tail region of a worm, if removed, cannot continue its existence. Crabs, lobsters, and crayfish are able to break off their limbs at will – a process called autonomy. More important, they are able to regenerate the lost parts. At the base of each limb is a special muscle which bends it until it breaks at a specially weakened place, the breaking point. At first only a miniature replacement limb is formed, but when the animal next sheds its skin the limb grows rapidly to almost the size of the original limb.

Insects, too, possess the power of regeneration, when young. Missing legs and antennae can be regenerated but do not develop fully until after at least one molt. A pad of regeneration tissue develops at the wound and forms the missing limb. Many abnormalities of regeneration are known among insects – a mantis has, for example, been known to grow a leg where an antenna had been lost.

One frequently sees starfish with one or more arms missing. The mouth and part of the digestive organs are in the central disk of the animal and thus it can continue to feed even when all the arms are lost. Its powers of regeneration are such that the starfish can develop new arms from the central disk alone.

Regeneration in vertebrates is much more limited. Lizards can regenerate lost tails but rarely is the new one full sized. Newts have been known to regenerate limbs and tails, so too have young frogs. In the higher animals, the powers of regeneration are confined to the mending of broken bones and connective tissues and the regrowth of some damaged internal organs.

In plants, regeneration includes the production of, for example, dormant buds and adventitious organs.